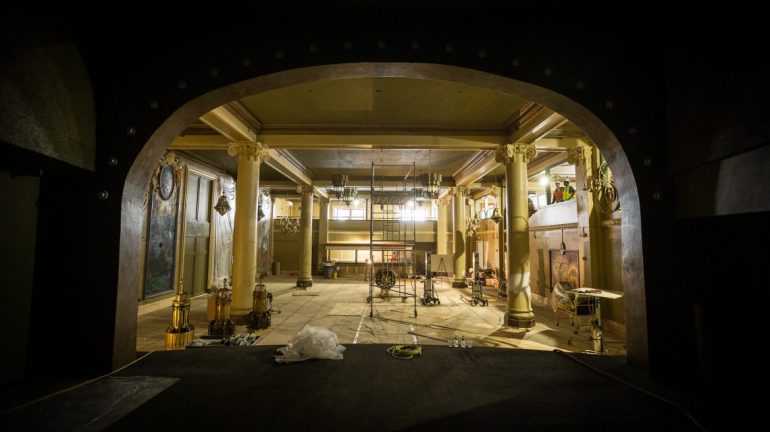 The buildup to McMenamins Elks Temple‘s opening has been impressive. It’s been a decade since the property was first purchased, and over the course of the last year we’ve been treated to the slowest of stripteases as the building’s sexy, restored facade was revealed.

Drone photos by Over Tacoma

The doors are set to open to the public on April 24, but we had the chance to pop in and take a look at the renovation progress on Wednesday. In no particular order, here are eight-ish things we learned along the way:

1. THERE’LL BE BARS AND BOOZE JUST ABOUT EVERYWHERE.

Starting in the basement (Commerce Street entrance) you’ll find a a seven-barrel brewery and a 16-tap tasting room. In the tiki bar 18 signature cocktails will be mixed alongside a waterfall. Booths for small and large parties will be available, as well as a fire pit to gather by.

Libations will also be served near the Spanish Ballroom, in a game area, in the pub, and beyond. You’ll be hard-pressed to find a place in the entire building where you’re more than a few yards from a place to get a beverage. We sampled a few of the cocktails they’re going to offer and they were deeelicious.

If you can find “The Vault” behind secret panels that will hide it you’re in for a below-the-street treat. Just big enough to fit 15 or so people, this secret bar boasts an unusual ceiling. Thanks to being located under an old sidewalk it has sections of grids of magnesium glass. Light from the outside trickles in through their purple tint until a passersby’s footsteps appear and squares momentarily go dark. All guests are welcome in the secret bar—if they can find it.

3. THEY SPENT A LOT OF TIME (AND MONEY) GETTING THE HISTORY RIGHT.

This historic building sat derelict for so long, many developers would’ve preferred to just tear it down. Back in 2004, the former owners of the Elks Lodge wanted to tear it down. Here’s a snippet of the legal battle that ensued, “They argue that under Tacoma Municipal Code (TMC)  2.01.060.E.8.a and TMC 2.01.060.E.8.b, the City cannot exercise the power of eminent domain, but must allow Zimmermans to retain ownership of the building and remove the blight by demolishing the building.”

Fortunately, Tacoma has a long history of rooting for the architectural underdog and the building is getting a proper facelift. When the McMenamins took on the Elks Lodge project, they knew they had their work cut out for them. A good chunk of the $34 million dollar budget went to historic research and restoration of nearly obliterated decorative elements. Hardcore purists may still be grumpy about some of the creative design choices but its a hell of a lot better than having the building torn down.

4. STOP IN FOR THE BARS, STAY TO OGLE THE LIGHTING.

McMenamins doesn’t mess around when it comes to lighting. They’ve spent over five years building the collection of pieces that are just now being installed in Tacoma. There are pieces from New York and Morocco, as well as a beauty from Seattle’s shuttered Orpheum Theatre.

Arguably the building will hold one of the best light fixture collections on the west coast, with hundreds of unique pieces strewn throughout the entire space.

5. IT’S ALREADY TIME TO KEEP AN EYE ON THE SPANISH BALLROOM’S CALENDAR.

The building as a whole boasts an impressive 41,442 square feet and the Spanish ballroom takes up a good amount of that. The venue has space for 700 people and tickets for the first few shows are on sale now. Some of the first bands taking the stage include The Melvins, Eliot Lipp, and Mudhoney. This space also has some of the best murals in the building. They’re based on Richard Wagner’s Ring Cycle with notable locals as the main characters.

6. SOME OF THE HOTEL ROOMS ARE COMPLETELY INTERIOR.

Up on the top floor, underneath a sky-high ceiling and at least a dozen light fixtures, a few of the hotel rooms are clustered in what was originally the largest of the Elks’ ballrooms. One of the most magnificent pieces from the original 1916 structure is the huge medallion in the center of the ceiling. This is surrounded by at least 20 skylights.

Currently the set of interior rooms resembles a small village. With construction still underway the space doesn’t quite yet embody what it will ultimately be. We’re told plants—many, many plants—will hang from the ceilings amidst the light fixtures

Which floor are we on? Did we take the right stairway? These are questions that will surely be asked by countless guests on their initial visit, but it’s ok. It’s meant to feel like a place to roam and explore. Grab a drink anywhere and enjoy journeying throughout the entire place. While you’re pushing on random chunks of walls looking for the secret bar be sure to look out for all the small details they’re working so hard to include.

Construction was in full ear-splitting swing during our visit, but it’s clear there’s still a lot of work to be done before bed linens are being put on. Final touches might come down to the last minute, but if there’s anyone who can get it all done it’s the McMenamins team. With 54 renovated locations in Washington and Oregon, they know what they’re doing.

BONUS: THE VIEW FROM THE ROOF IS INCREDIBLE.

There won’t be any public access to the roof but we wanted to show it off anyway. Depending on what room you stay in, though, the views will be pretty similar. In the coming weeks we’ll be delving deeper into the the history of the Elks Temple and the local artists making it pretty and new today. Stay tuned for more.

Drone photos courtesy of Over Tacoma. 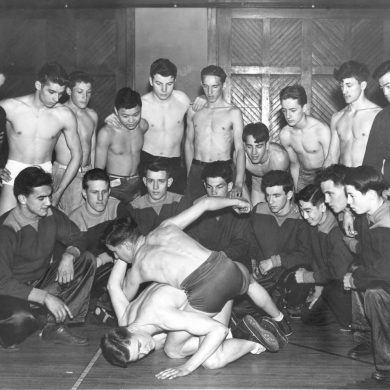