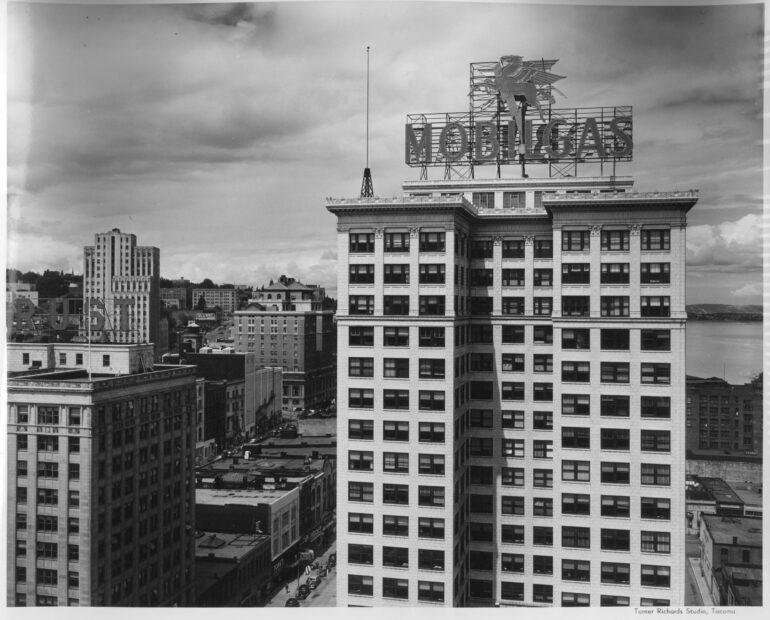 Whether it’s 2020 or the 1920s, it’s easy to stroll through downtown Tacoma under the assumption all the tall buildings are filled with office-type people doing office-type things. It turns out, though, that for at least a few years it was white mice rather than white collar workers taking in the views from the roof of the Washington Building at 11th and Pacific.

Check out the front page of The Tacoma Sunday Ledger from January 15, 1928:

“Rabbits and Pigs Live High” a headline reads. The photo caption explains, “Miss Dena Norguard displays one of the large rabbits that forms a part of the scientific zoo housed on top of the Washington building.”

The article goes on to elaborate:

Several hundred guinea pigs, white mice, white rats and rabbits are maintained in permanent quarters on the roof of Tacoma’s newest and most modern office building, the Washington building.

It is, in reality, a scientific zoo, maintained by a Tacoma biological laboratory for research work in the unending war on disease. The animals contribute their part in this modern crusade by developing serums used by physicians in the diagnosis and treatment of such diseases as tuberculosis, typhoid fever, dysentery, pneumonia and syphilis.

Each type of animal played a particular part in the research, though the rabbits (all Flemish giants) had a special role in “criminal experiments and medico-legal work where the authorities seek to determine whether bloodstains are those of human or animal blood.”

The article goes on to explain to readers: “This is accomplished by inoculating the rabbit with human blood and after a certain time testing the chemical reaction of the rabbit’s blood on the stains in questions.

“This will determine positively whether human blood made the original stain, but the experiment must be carried on indefinitely by the inoculation of the rabbit with the blood of other animals if it is desired to determine the exact nature of the bloodstains.”

The mice were used to determine the four different types of pneumonia, while the rats (specific rodents developed by the Wistar Institute of Anatomy in Philadelphia) were used for diet tests and food research. Those not involved in research were given the duty of raising new Wistar rats for further research work—a problem that was no problem at all when it came to the guinea pigs.

Used to “provide a medium for experiment in various diseases and permit diagnosis in cases where the microscope is unable to detect disease,” the “guinea pigs need no encouragement in this field of endeavor, and in fact the principle problem of the laboratory is keep their stock down to such numbers as can be accommodated on the roof of the building.”

Perhaps in an effort to ward off any critics the article notes that “the task of these rodents is not an unpleasant one and they are the indirect means of saving many human lives. Those who must yield their blood for scientific research are given a general anesthetic and receive the same the same consideration as human patients in a hospital.”

One employee was dedicated to caring for the “medical menagerie, whose pens are cleaned daily.”

And there you have it, folks. The tale of the time the roof of the Washington Building was a “scientific zoo” in mild danger of being overrun by guinea pigs.

As the article aptly concludes: “The zoo had been maintained there for several years, but few people who pass the corner of 11th and Pacific are aware of the germs and rodents that flourish 18 stories above them. And it wouldn’t matter much if they did know it.”

Special thanks to the Tacoma Public Library‘s Northwest Room for preserving stories about Tacoma like this one. 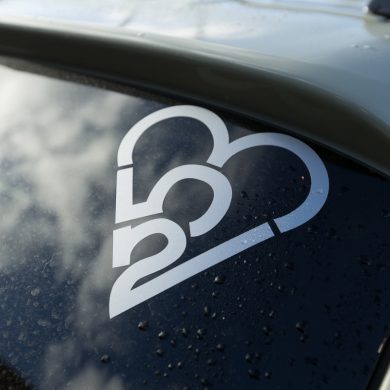 Is There a Right Way to Rock Your 253 Heart? Its Creator Weighs In