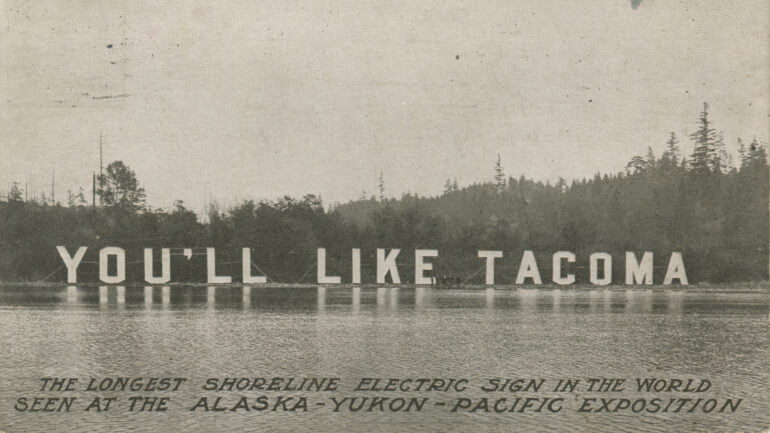 You’ve seen it on T-shirts, bumper stickers, and murals. You might even have a 24”x36” poster of the original lithograph. There’s also a modern LED collaboration with the 253 heart that has been making the rounds in Tacoma. But how much do you know about the original sign that made the slogan famous?

The phrase “You’ll like Tacoma” is about as straightforward as slogans get. 111 years ago, this message was proclaimed in classic early 20th century over-the-top fashion with a 250-foot-long illuminated sign, purportedly the largest in the world at the time (five figures standing at the base of the E give it some scale). The sign was installed as part of the 1909 Alaska Yukon Pacific Exposition in hopes of driving some of its hundreds of thousands of visitors south to Tacoma.

Expositions were relatively common back in those days in cities all around the world. At a point in history when other countries—and even other states in the US—were largely unknown to the average citizen, expositions served an introduction to specialized industries, advanced technology, and foreign cultures.

It should be noted that turn of the century expositions were, unfortunately, inextricably tied to colonialism and exploitation. It’s a fascinating yet often disturbing facet of history that could easily take up an entire article of its own. If you’re interested in that kind of thing, I would highly encourage you to read more about the AYPE and other contemporary expositions.

The exposition ran from June 1st to October 15th of 1909 and it was a full-on bigass deal, drawing crowds from all over the country. According to historylink.org, a waiting crowd cheered for more than five minutes straight after President Taft officially opened the exposition via telegraph signal from the White House. Opening day saw almost 80,000 people despite heavy rains and a number of mishaps.

The AYPE took place in Seattle on what is now the University of Washington campus. While this is relatively common knowledge, the exact location of Tacoma’s record setting self promotion is a little foggier.

There are a lot of maps of the exposition detailing the various attractions but none of them mark the location of the sign. It was obviously on a shoreline and given the layout of the UW campus, it was probably somewhere on the shores of the Montlake or Portage Bay neighborhoods. If you’ve read any of our other history stories, though, you’ll know we’re not big on the concept of “close enough.”

Fortunately for us, what the AYPE lacked in descriptive maps, it made up for in photography. There are hundreds of old photos from both official photographers and amateurs who were given special photo passes. In a handful of these photos, the sign can be seen in the background. Photographers had a habit of labeling images directly on the negatives so the location each photo was taken from is easy to figure out.

Beyond the south end of a busy promenade known as the paystreak, the sign can be seen on the other side of the water. If you overlay a map of the AYPE on the modern day UW campus, this promenade draws a line straight to Montlake Playfield Park, just north of Capitol Hill.

So next time you’re in Seattle driving on the 520 over Portage Bay, you can point to the land side and say to your friends, “Hey, did you know there was a huge sign here 111 years ago that told everyone they’d like Tacoma?” I’m sure they’ll be super impressed.

So, mystery solved, right? Not quite. The sign was definitely there, probably for the bulk of the exposition, but that’s not where it was installed when they took the picture everyone knows and loves.

If you compare the two images, it’s clear that the background is different. The postcard image shows a low sloped shoreline while the photograph from the paystreak shows the much higher elevation of Capitol Hill in the background.

It just so happened, though, that there was one more photo, taken from near the south end of the paystreak, that shows it in a different location. In the background of this photo, the sign can be seen on a shoreline with a much more similar background as the one in the postcard image. That shoreline is now the southwest corner of the Montlake Cut, just about where West Park Dr E. is now.

The canal wasn’t much of a canal at all in 1909 so it’s not really visible in the photo. By the time they finished construction and cut the dams, joining Lake Union with Lake Washington in 1916, the land and water level where the sign was installed had been heavily modified. In spite of that, if you look at the general land contours from the perspective of the original photograph (taken from approximately where the Oceanography Dock Building is now), it still matches up.

So if your history geek friends weren’t thoroughly impressed by your first point of interest, you can take them for a walk in West Montlake Park and show them where the sign stood in the actual photo.

Why the sign was moved remains a mystery. The more famous photo was presumably taken before the exposition so the postcards could be printed ahead of time (most of the AYPE postcards were printed in Tacoma, by the way). They may have moved it for better visibility after seeing how popular the paystreak was.

The slogan made its debut at the AYPE but it was used in Tacoma for some time afterwards. There were at least two electrically lit banners strung across Pacific Ave and the slogan appeared on postcards, pamphlets, and other memorabilia.

Unfortunately, no one knows what happened to the original photograph. Every version that exists today—as far as I’ve seen—comes from one of the lithograph postcards that visitors got from the AYPE. We were able to track down one of the original postcards, mailed in 1910, and it included this message on the back:

Dear [illegible name]: glad to receive your letter today. Was so sorry to know you were still in poor health. Will write you a good long letter very soon. Baby is well also her papa. Much love to all. [illegible name]

This is the postcard we used to produce our poster-sized prints. We also have a modified version in the shop, in case you’re feeling saucy.

I’d like to give a huge shout out to the helpful staff of Tacoma Public Library’s Northwest room, to the Washington State Historical Society not only for preserving the rich history of our region but for making it available for the public to enjoy and learn from. And to Peter Callaghan of The News Tribune who, in 2009, went looking for the same answers and got most of the way there. 😉

Researching and writing stories like this takes a lot of time. We wouldn’t be able to afford that time without the generous support of local business owners like Anders Ibsen. He’s a lifelong Tacoman and a Realtor. Check him out at andersibsenhomes.com. 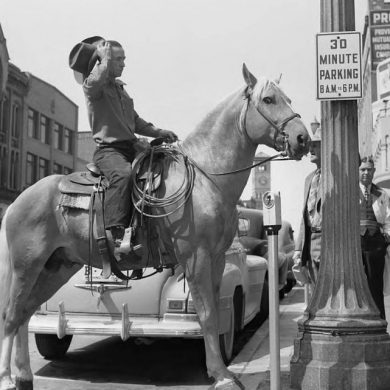 How to Avoid a Parking Ticket in 1940s Tacoma