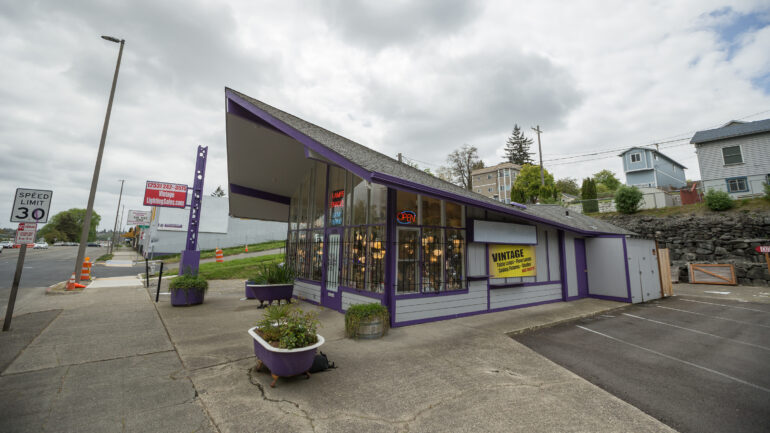 The owners of 1524 Tacoma Ave S. are selling their property, but that doesn’t mean their small, purple-trimmed building will soon be demolished and replaced by a condominium. There aren’t any outside investors buying the land either, and that’s all thanks to Cindee Moore and Sherry Bockwinkel.

The pair are the retiring owners of Vintage Lighting Sales, which has called the space home since 2010. A recent Facebook post of theirs elaborates:

We are retiring because we sold our property to Jason. Our feelings are mixed as we will miss our lamp shop and our wonderful customers but know our great location is going to a super person.

If the name Jason just on its own doesn’t ring a bell, they’re talking about Jason Kinlow—the owner of Go Philly Cheesesteaks and Wings from one block over. He even lives on the same street in the house he inherited from his grandmother.

“It’s a great little story,” Sherry told us when we stopped in Wednesday. Jason’s business “got squeezed out by a tall building. They were trying to squeeze me out for a tall building too, but I was like, ‘What are we going to be? Just wall-to-wall buildings around here?’ None of it’s affordable.”

“Have you ever heard of the concept of a spite building?” Sierra, my partner here at Grit City Magazine, asked her. “You’ll see them in a lot of big cities where the block goes giant condo, skyscraper, skyscraper, and then there’s this one little house right in the middle where someone said, ‘Nuh-uh. I ain’t gonna do it.'”

“They actually changed the code in the last few years,” Sherry replied, exasperated. Waving to the space between The Mercato and The Napoleon Apartments she continued, “There was going to be no air space between them. Just wall to wall. I mean, why would they do that? The condos are just coming in all over the place.”

Although Sherry is thrilled her property is remaining in the hands of a local business owner, she isn’t entirely against the changes happening on Tacoma Ave.

“We used to call it the shooting gallery,” she said when we spoke a few months prior. The lots directly across from the shop were previously a vacant, much like the many others that still exist between Tacoma Ave and Fawcett Ave. According to Sherry, the space was absent of buildings but still had residents in the form of homeless living there, and the area was a hot spot for fights, drug deals, and other types of crime.

“This was the era of pagers,” Sherry continued. “We had a phone booth out front here and they would use it constantly. When I first got there I had no idea about anything, but pretty quick I realized, ‘Oh, this phone’s a problem.’ I worked with the police for years. It was just a real rough neighborhood.

“Me and Bev, [a fellow shop owner] down the street, would be pushing the prostitutes one way or another. They’d be over here, then they’d go down there. Bev would call me up and be all mad everyone was on her block, so she’d play classical music to try and drive them away! I’d get out and I’d pick up the trash all the time. Cigarette butts everywhere. We were just trying to make the neighborhood better.”

Late this spring the unique little building will return to its restaurant roots. Long-time Tacomans likely recall it was built in 1959 as one of three Original House of Donuts locations. After that the shop served burgers and shakes as a drive thru, then operated as a quick-printing service for 25 years before becoming the Vintage Lamp Repair (renamed Vintage Lighting Sales in 2018).

As for what will become of the purple bathtubs out front, Sherry wouldn’t quite say. “Well, ummm,” she stammered when I asked. “I can probably answer you tomorrow. That’s when I can tell you the really cool part of the story.” My call to Sherry for more info the following day was not immediately returned, but please know we’ll update on this pressing matter as soon as possible.

“Thanks for the memories!” Sherry and Cindee’s Facebook message to fans concluded. “We will dearly miss our friends who would just stop by to say hello.”

Vintage Lighting Sales is now open by appointment only and will close for good on Leap Day—February 29. 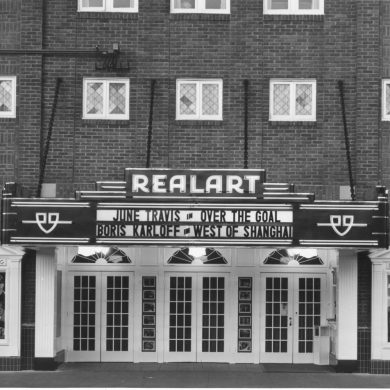