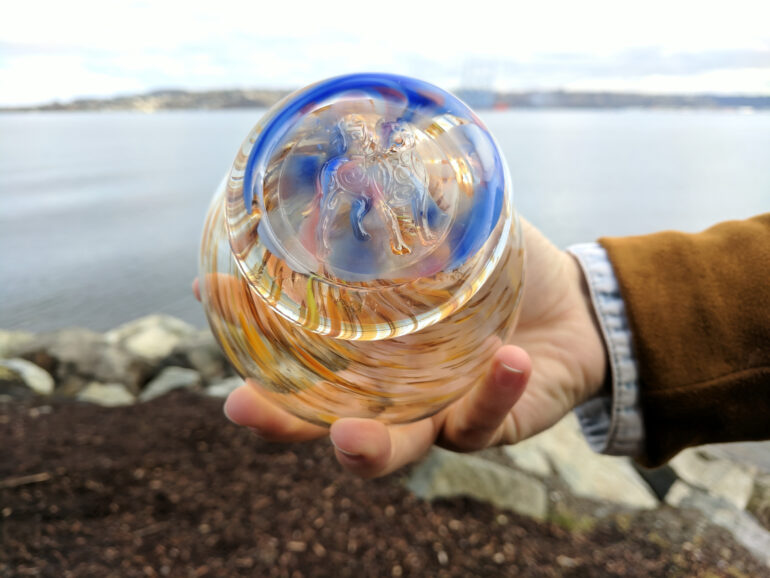 A little Backstory on Monkeyshines in Tacoma

If you’ve ever explained the concept of Monkeyshines to someone outside of Tacoma, there’s a good chance they just didn’t get it at first. It doesn’t really fit into any societal norms or customs and the idea of giving away art in as random and secretive way as possible just confuses some people. Personally, I think some people have just fallen so far into the depths of adulthood that they’ve simply forgotten how fun it is to find hidden treasure.

Finding a big glass ball sitting in the crotch of a tree or floating in a pond is fun not just because of the thing you found, but because of how it got there. Someone hid it there hours or days before just for some stranger to find it and have a moment of unexpected joy. More than that, someone else spent a fair amount of time forming the glass into some pleasing pattern, blowing the ball, and stamping a Chinese zodiac animal on the top.

An entire city may have walked right by it before that stranger came along and took the time to crouch down and reach for something shiny.

The mystery surrounding the whole thing is a big part of the fun. Nevertheless, we were really curious about how it got started and what’s in store for the future. We recently met up with the woman behind the whole thing, Ms. Monkey, and asked her all about it. As it turns out, Ms. Monkey is exactly the kind of person you’d imagine coming up with something like this:

“I was in Wright Park with a friend one year and they threw one out on that little island in the pond. No one was noticing it so I pretended to find one in a bush. I was like, ‘Oh my GOD! What is this?!” and a bunch of people came running over and told me all about Monkeyshines.”

“Eventually one of them noticed the one on the island and she started stripping off her clothes. One of her friends was like, ‘No, we came dressed for this’ and went out to get it for her. She was happy, they were happy, I was happy. We all hugged each other and were best friends for that moment, even though I was totally messing with them.”

The first batch of Monkeyshines went out in 2004 but the Chinese New Year connection was actually just coincidental. Ms. Monkey knew an artist who had a bronze stamp with a monkey face on it and the whole idea came together on a whim. The first batch of 250 balls were meant to be hidden around Christmas but they didn’t get them all finished in time.

So Ms. Monkey went to the calendar to see which holidays were coming up next and Chinese New Year was next in line. It just so happened that 2004 was the year of the monkey so it worked out perfectly.

Everyone went nuts for them and they did it again the following year, this time with a rooster. That was also the year they started doing medallions—but it wasn’t for a purely artistic reason.

That year Mr. Monkey made a sculpture of a rooster and Ms. Monkey made a bronze mold of it. They didn’t measure it ahead of time, though, and it ended up being too big. Ms. Monkey explained, “I was like ‘Oh, crap! We can’t make balls out of these!’ That’s why we added medallions for the year of the Rooster.“

Even the pseudonym “Ms. Monkey” was a spur of the moment idea that only came out after everyone started asking who was behind the project. “If I had known it was going to go on this long I probably would’ve come up with a better name,” she said, laughing.

The Chinese zodiac goes in a 12 year cycle: monkey, rooster, dog, pig, rat, ox, tiger, rabbit, dragon, snake, horse, and ram. Following the success of their first round of Monkeyshines, Ms. Monkey and her crew of helpers went through the rest of the zodiac. Early on, the plan was to make it through to ram in 2015 and be done with it. The whole thing was so wildly popular, though, that they just kept on going.

As much fun as it is, it’s also a hell of a lot of work. Last year they made 2,000 Monkeyshines. That’s about 40 unique pieces of glass art for every square mile of Tacoma. And in case you’re wondering, yes, they do cover every part of Tacoma.

As Ms. Monkey put it: “That’s very important to me. You see a lot posted on social media about downtown and the North End, but it was never important to me that people knew what they were finding. It still isn’t. Just that they find something unexpected is cool enough.”

Early on, a lot of people didn’t know what to make of them. Some people thought they had been stolen from the Museum of Glass and ditched somewhere in the getaway.

That mystery of discovery touches on one of Ms. Monkey’s biggest rules: never give away a Monkeyshine. People who have collected them year after year will occasionally go out and rehide old ones. “Because it’s not about the thing,” she explained, “It’s about the experience, the hunt, the friendship, the possibilities. The magic. I really get sad when people give one away because it takes away all of that.”

There aren’t a lot of rules governing this thing, but there are a couple other points that people should keep in mind while hunting for Monkeyshines. First off, don’t stalk the monkeys. Not only is it missing the point of the whole thing to try and nab one just by following a hider, it’s also super creepy to be following strangers in the dark.

Next, be careful while you’re hunting. People tend to congregate in a few popular areas and when you mix distraction with traffic, it’s just asking for trouble. Don’t be the dummy that taints this whole thing with an unfortunate accident that winds up on the news.

Lastly, only take one. This is pretty well known among Monkeyshiners and should be obvious anyway. But just in case you’re wearing your lucky undies that day and you find more than one, think about how great it was to find them and who else you can share that joy with. Don’t be greedy.

If you’ve ever wondered what the official stance is on Rogue Monkeys, Ms. Monkey gives it a big thumbs up. She sees this whole thing as a community event and doesn’t get into anyone else’s business. She even started disbursing a grant from the Tacoma Arts Commission to a select few artists to make their own pieces of art for hiding. If you’re thinking about making your own stuff to hide, go for it. But be mindful of what you’re leaving outside. Tacoma doesn’t need any more plastic bags in our streets and parks.

Everyone has their own Monkeyshines story but hearing them straight from Ms. Monkey was a real treat. She told us about how people will send her messages as if they’re writing to Santa Claus, thanking her for preserving this bit of magic.

“We heard once about some guy once in a bar trying to pick up a girl by impressing her with his monkeyshine,” Ms. Monkey said with a hearty laugh. “A vehicle for loooove.” She also shared another story that—fair warning—could bring a stone statue to tears.

A man was walking through Wright Park late at night on the eve of Chinese New Year. His wife had just had a late-term miscarriage nearby at Tacoma General. He found a glass star in a tree and brought it back to his wife. In that moment of unimaginable loss, this small thing brought them a bit of happiness. They eventually had another child and, though it was born prematurely, the baby eventually thrived. They gave the baby the middle name Star after the glass star they found and the memory of that night.

Monkeyshines is undoubtedly one of Tacoma’s greatest treasures. But Ms. Monkey has been doing it for a lot longer than she had planned and she doesn’t plan to do it forever. After this 12-year cycle ends, Ms. Monkey is planning to take a step back from the Monkey Ball business. “I’m not sure what that will look like. That might just be the end of it entirely.”

She has a lot of fun with it but she also takes it seriously and is not keen on handing the reins to someone else who may not manage the project as well as she has. In the meantime, the mission is to grow. In Ms. Monkey’s dream world there’d be coffee carts out to caffeinate seekers in the wee hours, buskers on the street entertaining, and a monkeyshine-themed beer on tap somewhere. The whole city could come alive during our darkest and dreariest months for the sake of art and community.

If you’ve been putting it off for the last few years or if this is the first time you’re hearing about it, consider this your official kick in the pants. As extra incentive, here are a few tips: 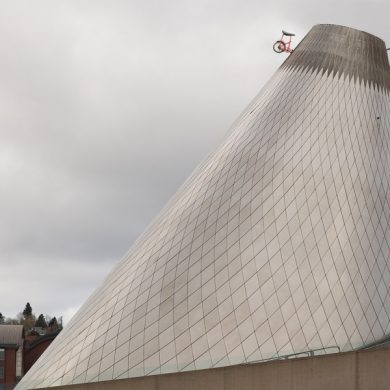