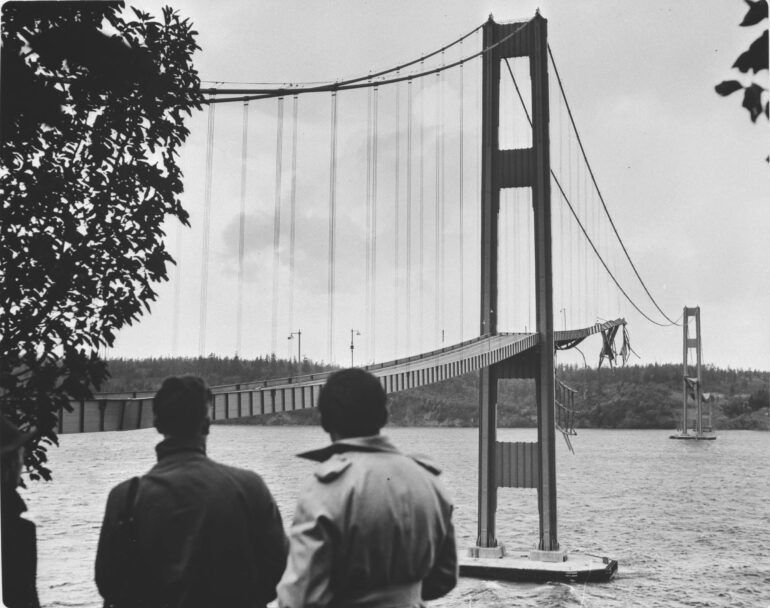 For a brief period of time many Tacoma residents experienced the bit of bounce that earned the original Tacoma Narrows Bridge its Galloping Gertie nickname. There are few who experienced that movement morph into catastrophic, twisting ripple, however.

The names of a few of the people who survived that day may be familiar to you. There’s Leonard Coatsworth, who lost his vehicle and his dog, Tubby, when the span plunged into the Narrows. Or Howard Clifford, photographer for The News Tribune, who is known as the last man off the bridge.

But there are also others whose names you may not be as familiar with. Here we take a look at two of those stories. The first contradicts Clifford being the last one off, and the second is the tale of a woman who’d never even set eyes on the bridge before that fateful day.

WINFIELD BROWN—PLENTY OF THRILL FOR A DIME

The Narrows Bridge “mystery man,” a phantom figure seen on the huge suspension span Thursday as it was cracking up, turned out today to be a college freshman who had paid a dime “for the thrill of walking across the bridge in a high wind.”

How the bridge suddenly began to sway like a swing, how he crawled “ashore” on his hands and knees with the bridge pavement crackling beneath him and chips of cement whistling past this head was told by Winfield Brown, 25 years old, College of Puget Sound student.

“I was certain I wasn’t going to make it,” Brown said. “I was so seasick I couldn’t stand up. I thought I’d pass out for sure. Sometimes the bridge tipped right on its side and I could look straight down at the water, 190 feet below me.I thought I was a goner for sure.”

Brown, gingerly removing bandages to show bruises and cuts on his knees, said he paid the 10-cent pedestrian fee to get on the bridge.

“I got plenty of thrill for a dime,” he exclaimed.

“I went down to the bridge just for pleasure,” the student recounted. “When I got up the wind was blowing hard and I thought how the bridge must be swaying, so I drove down so I could walk on it while it was swinging.

“I was on it before 10 o’clock. It was rippling more than usual and I was having a lot of fun. I walked across and back. People going by in cars all the time were laughing and having a gay old time because of the rippling motion. I decided to walk across again because I saw a Coast Guard boat coming and I wanted to watch it go under the bridge.

“When I was nearing the middle the rippling motion stopped and the bridge began to sway madly from side to side. A car was just going by me and it smacked into the curb and a man jumped out. (This was Leonard Coatsworth, News Tribune reporter, who abandoned his car and crawled off the bridge. Coatsworth told of seeing another man crawling from the bridge but the second man was previously not identified.)

“The bridge was cracking and groaning and I was scared. As I watched the man jump from his car I was thrown to the pavement. He went down, too. We tried to get up but the swaying motion made it impossible.

“Finally I got to my feet. I noticed the other man couldn’t stand at all. Then he started to crawl and so did I. I was about twenty feet ahead of him. When I got opposite the bridge tower the swinging wasn’t so violent and I got to my feet and got ashore. The man, thirty feet behind me, was still on his hands and knees… I was terribly seasick. I just laid on the ground.

Brown said the bridge’s motion—a longitudinal ripple to a lateral sway—changed in only a few seconds.

“Something just seemed to snap,” he added.

“I must have been on the bridge at least 45 minutes. It took me at least 10 minutes to crawl off to safety.”

RUBY JACOX—I WAS READY TO GIVE UP

A little dark-haired woman with a lot of spirit tells a story of almost miraculous escape from the collapsing Narrows bridge.

Mrs. Ruby Jacox, of Five-Mile lake, who never had seen the bridge before, went for a ride across it Thursday in the truck of which she is part owner, and is fortunate to be alive. She is badly bruised and scraped from a half-hour struggle to crawl off the bridge and was kept overnight in the Bridge hospital to recover from the terrific nervous shock.

She and her business partner, Aurthur Hagen of 837 So. Anderson St., lost their truck with the bridge. In it went a half ton of wire they were delivering to the bridge contractors on the Peninsula side.

“I think we were almost at the center when the bridge started to sway,” said Mrs. Jacox. “With our heavy load we had to climb up there in low gear.

“All of a sudden the bridge began to rock. We were afraid the truck would turn over so we shut off the ignition, set the brakes and we jumped out.”

“We could only crawl on our hands and knees, and got about 10 feet away when the truck fell over.

“You haven’t any idea what mental state a person goes through. I was ready to give up but he (Mr. Hagen) just dragged me along by the shoulder.

“We crawled along hanging onto the ridge in the center of the roadway. Just to keep our courage up we never stopped talking. He’d say, ‘Come on. You’ve got to get past that lamp-post before it falls.’ I’d struggle a little farther.

“One of the posts did just miss my head.”

Chunks of the concrete actually burst out of the bridge deck as it swayed, groaned and buckled, the young business woman said. Shoes scraped almost through, and painful bruises on the knees, ankles and left hip told of her struggle to get over the debris.

“I kept thinking,” she said, “that this bridge was something that couldn’t break. It had been inspected by government engineers. And experts had planned it so it would stand any strain.

“If I’d know what was going to happen, I couldn’t have gone on. Sometimes I was sure we’d never get off the bridge.

“But I’ve got a boy up at Lincoln high school and I had to get off. That boy needs his mother.”

Curious what happened to Galloping Gertie’s broken bits? More here. And don’t miss the story about how a local man discovered he’s living in Leonard Coatsworth’s former house, which is in our first print magazine. 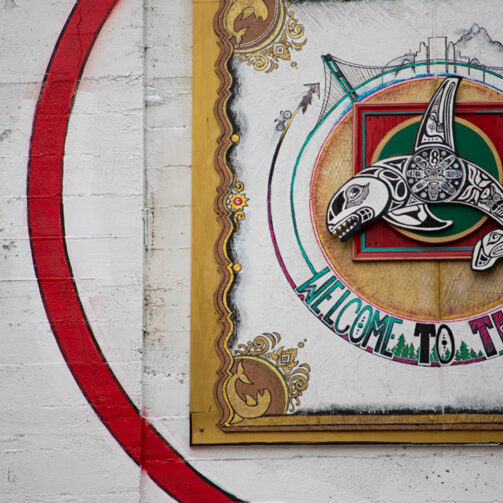