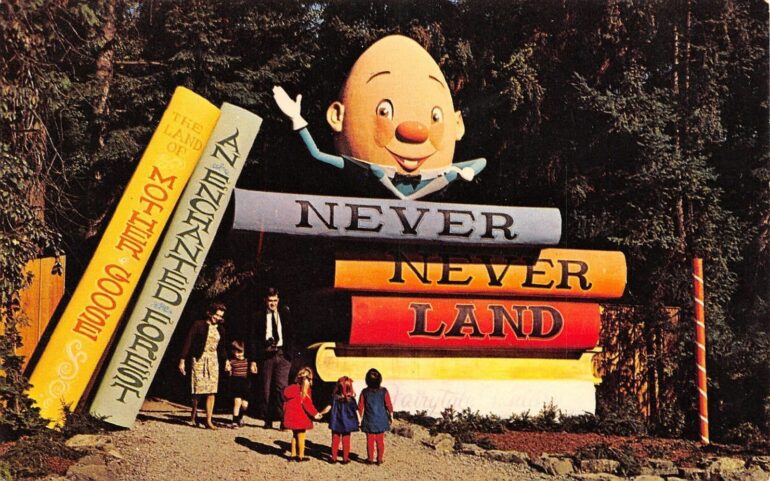 Tacoma’s Never Never Land May Return to Play Another Day

If Dave Mitzel and his 14-year-old son Brandon get their way, Never Never Land will no longer be a thing of the past. The pair have their hearts set on bringing Tacoma’s beloved storybook park back into existence, and are eyeing April of 2021 as an opening date.

We recently sat down with the pair at Antique Sandwich Company to hear about their plans. Dave grew up in the Yakima Valley but visited the park in the 1960s. He moved to Tacoma in the ’80s. Brandon is too young to have ever visited the park (the last of the statues were removed in 2001), but seems to know more about its history than many longtime Tacomans.

If your memory is hazy, here’s the quick overview: Tacoma’s Never Never Land was opened in 1964 by Alfred Pettersen. Admission in the early years was 50 cents for adults and 25 cents per child. On opening day the attraction raked in $1,350.00. By the end of the first year more than 90,000 visitors had passed through the gates.

Alfred had opened a similar park in Canada two years prior. Molds for the statues that were created by Hungarian sculptor Elek Imredy made each character reproducible. Alfred sold the collection to Metro Parks in 1985. They then charged admission to visit the fairytale scenes until 2001. Time, weather, and a lack of maintenance all took a toll on the statues after that, and the final pieces were removed in 2010.

Traces of Never Never Land remain out near Fort Nisqually today, including pathways and a well. Dave and Brandon even recently turned up bits of the shoe from the dirt.

It isn’t going to be easy for them to put Never Never Land together again.

Dave and Brandon say they have been in contact with Metro Parks about their project. They aim to purchase what remains of the original statues, and have obtained an inventory list. After removal from the site in 2001, many pieces were stored in Point Defiance’s pagoda, which sustained a fire in 2011. Many of the statues suffered varying degrees of damage.

Dave and Brandon also aim to purchase molds Metro Parks owns so they can have missing pieces replicated. Their goal is to recreate the entire set before opening, then possibly adding new scenes such as Rock-a-bye Baby. They’ll stick with the classics, though.

Though they’d initially hoped to restore Never Never Land to its original location near Fort Nisqually inside Point Defiance, obtaining permission from Metro Parks doesn’t appear to be an option.

Swan Creek was thrown out as one idea. Other possibilities could exist within Pierce County Parks and Recreation, including right near Sprinker Recreation Center. “We wanted to go back to the original site, because of the nostalgia,” Dave explained, “but perhaps somewhere new could be even better. The old site is pretty remote.”

On the wish-list for the new location is room for a stage, picnic area, food trucks. The plan is for the park to run seasonally, April to October. They would also consider opening for holiday light festivals, like Zoo Lights does now at Point Defiance.

If the family’s last name rings a bell you’re likely thinking of the Mitzel’s American Kitchen. Dave’s cousin owned the restaurant chain. Dave worked there as a general manager for 33 years.

Metro Parks initially bought the statues for something like $42,000. That was in the 1980s, and also before many pieces of the collection were lost in the fire. Dave says they’re willing to sell what’s left but they haven’t named a price yet.

The first thing Dave wrote in his business plan was $110,000 for security annually. “You just have to,” he said. “Not just during the season, but off-season as well.”

The plan is for the new park to have a full gift shop ready to sell memorabilia on location and online. Admission to the new Never Never Land will be paid. Dave estimates prices will run something like $10 per adult and $5 for children. Those fees account for the coming jump in the minimum wage rate. Thanks to modern technology Dave won’t have to deal with one of the problems the original site faced—sticky fingers grifting from entry fees paid in cash.

In total Dave estimates it will take about $700,000 to make the whole thing happen. They toyed with doing a GoFundMe for a moment but currently he hopes to finance the project himself via a business loan.

Need a little more Never Never Land in your life right now? Check out what the place looked like in 1993, thanks to Erin Bricker’s video:

For now there isn’t a specific call to action to help make Never Never Land 2.0 happen to share with you.

But, you are welcome to follow Dave and Brandon’s progress via their Facebook page and website. They’re also looking for volunteers: contractors, artists, organizers, etc. Shoot them a message if you’re interested in helping out.

Photos by Sierra Hartman and courtesy of the Tacoma Public Library

Update 10/25/19: Dave and Brandon now have a GoFundMe setup that those who are interested are welcome to check out here. 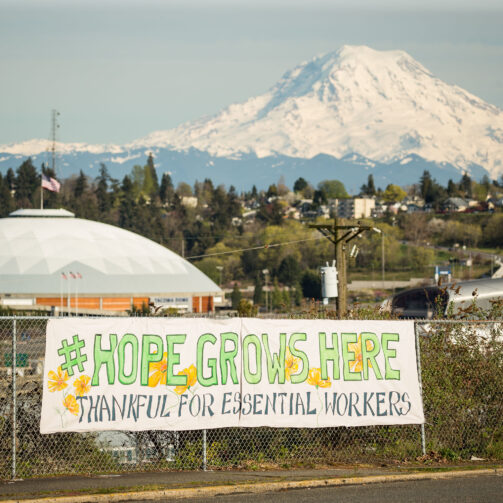 A Message to Tacoma From Our Healthcare Workers