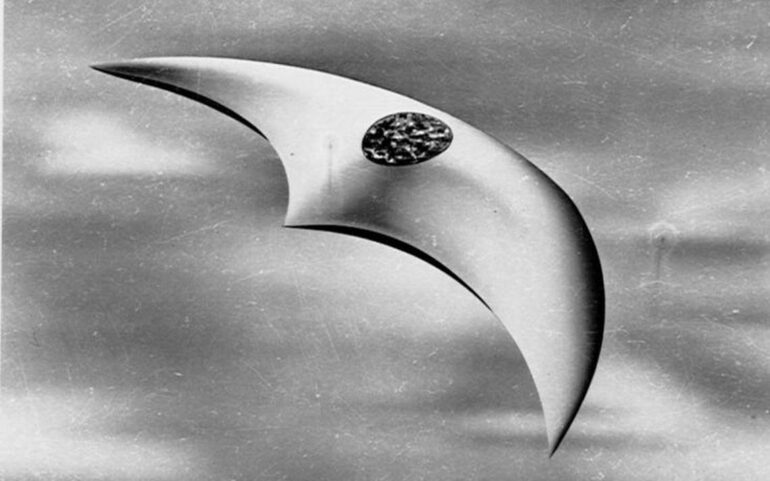 How Tacoma Gave the World the Flying Saucer

Art Chantry has been insisting for years that Tacoma is “the center of the unknown universe.” All kinds of shit out there has ties to our City of Destiny, including the UFO.

Art knows a hell of a lot about a lot of things, and shares what’s on his mind regularly through Facebook. With his permission, the following is from one of his recent posts.

(Fair warning—he isn’t a big fan of traditional capitalization. Just go with it.)

June 24th, 1947, Kenneth Arnold was flying over Tacoma and Mt. Rainier when he saw a formation of 9 flying silver objects. he clocked their speed and it was fantastic fast. they were BATWING shaped (this [header image] is an artist’s rendering of his description).

they flew in a peculiar motion where the objects (in sequence one after another) would do a strange sort of fluttering “dip” as they flew. he described it as what a saucer would look like “if you skipped it over the water.”

a lazy reporter in Yakima interviewed him (human interest crackpot stories being popular) listened to Arnold ‘batwing shaped objects’ but (instead) used the coined phrase “Flying Saucers” in the headline to describe the objects he saw. thus was the invention of the popular notion of ‘flying saucers’.

at first the images described remained batwing shaped. but, soon people switched over to seeing “disk shaped” objects in the air (due to the ‘flying SAUCER’ phrase). it just plain captured the imagination. we’re that easy.

popular culture began making UFO’s actual flying disks in 1950 with the release of “The Day the Earth Stood Still.” a huge box office hit. (strangely, Frank Lloyd Wright was hired as consultant on the design of the space craft in the movie. so, ol’ frank had a hand in creating the modern flying saucer)

that movie was the first mass-popular image of a ‘flying disk’ foisted upon the public and from that point on, all anybody ever saw in the sky was flying SAUCERS. nobody EVER saw a batwing shaped object ever again.

after much reading, i’ve decided that what Kenneth Arnold actually SAW flying over Mt. Rainier in 1947 was a test flight of the FLYING WING aircraft, then still a top-secret airplane design being developed on the hush-hush.

originally the Flying Wing was propelled by aircraft propellors (like that last remaing example that crashed a few weeks ago). toward the very end of that program, there was actually a fleet of JET powered Flying Wings built and tested, based in nothern California.

the testing flight field for maximum privacy testing was over the mountain ranges of the almost unpopulated Cascade mountains to the north (and over Washington state).

tellingly, the Flying Wing had stability problems in flight and was often buffeted eratically by winds. when flying in formation, they would often catch the trails from the planes in front and it would cause them to juggle up and down in flight – EXACTLY as Kenneth Arnold reported with his “saucer slkipping over water” description.

when the Flying Wing program was cancelled (VERY soon after the Arnold sighting), the entire fleet of jet-propelled test aircraft were ordered destroyed immediately. to this day, many scholars have no idea that jet engines were ever placed on the Flying Wing.

however, there is film footage of a jet powered Flying Wing aircraft taking off from an airport. it’s in the movie “War of the Worlds” (the 1954 George Pal film, it’s the aircraft they used to drop the nuke on the aliens.) they even ernestly call it ‘the Flying Wing’ in the script. so, there is no denying the jet version existed.

and that is how Tacoma gave the world the flying saucer.

someday i’ll tell you how Tacoma gave us the ‘Men In Black’ as well. it’s actually connected to the Kennedy assisnation, too.

i love this town. 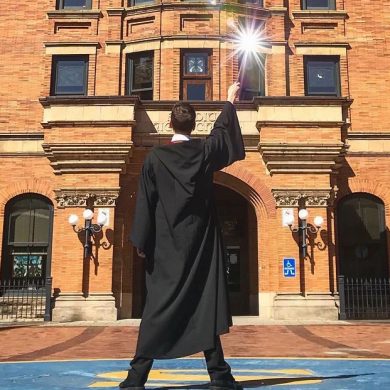