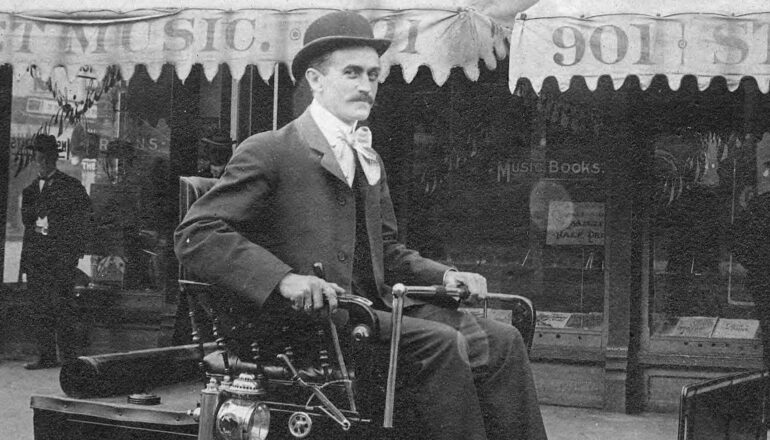 In 1899, W.W. Pickerill became the very proud owner of the first automobile in Tacoma. It was summer when the 4 horse-power Locomobile he’d paid $750 for arrived, and so naturally he took the “instant, eye-popping attraction” to the streets.

A caption in the Tacoma Public Library‘s online archives elaborates: “people stopped and stared and crowds gathered to inspect the ‘wagon that ran without horses.'”

Pickerill again pops up in the archives in 1906. In the seven years since obtaining the first car in the entire city he’d become president of the Tacoma Automobile Club. Part of his duties, it appears, was hanging up what is believed to have been the first two “automobile danger signs on the North Pacific Coast.”

“It warns motorists of a $10 fine for cars descending the S-shaped hill at Halfway Park should they go faster than 4 mph. A similar sign at the foot of the hill, about a mile beyond South Tacoma, states a 10 mph limit for cars going up. Motorists must keep to the right. The legal limit within Tacoma city proper was 12 mph, per state law.”

Just who was this mustachioed man? Why, he was owner of the W.W. Pickerill & Co. Music House, located at 901-03 Pacific Avenue. He was known in Tacoma as “Professor” Pickerill, and he formed several music groups featuring the mandolin and guitar.

His store also has a claim to fame in that it showcased Tacoma’s first roof garden. “It had the first roof garden in Tacoma where nightly songs and band music could be heard and ice cream and sodas enjoyed.”

Pickerill married Ida May (maiden name Chamberlin) on September 19, 1894. She was thedaughter of a prominent Tacoma dentist and a member of the Ladies’ Mandolin, Guitar & Banjo Club. They had two children, Harold and Dorothy.

He eventually became the manager of the Washington Automobile Co., which was the first car dealership in Tacoma.

Parading cars around appears to have been a pastime both he and Ida enjoyed. In 1905, Tacoma celebrated its annual Rose Carnival. “The three-day festival drew thousands to Tacoma and one of the highlights was the grand opening parade featuring 21 flower-festooned cars.”

Pickerill is pictured here “in the semi-circle of automobiles with his Model B Ford decorated with a white swan on its hood. At a time when cars were still a rare sight to behold, a large group of spectators has gathered at Wright Park to marvel at the rose-covered cars and their intrepid passengers.”

By 1906, Pickerill had upgraded to a 6-cylinder Ford Model K Roadster. This photo of him in the car was taken on Broadway. The building on the right is the one we still know as the Union Club today.

Pickerill expected “the number of ‘machines’ in Tacoma to more than double in 1906. Although Mr. Pickerill credited the improvement of highways, he sought even better roads and envisioned a day when a motorist would be able to drive to Paradise Valley on Mount Rainier (then called Mount Tacoma) and back in the same day.” 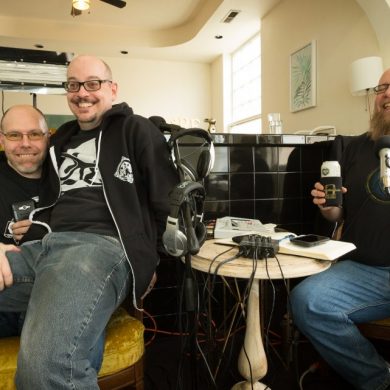