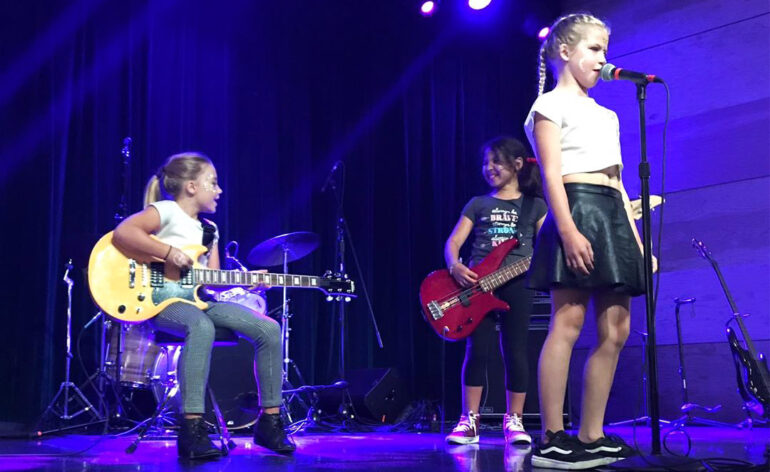 *Nikki Max is a pseudonym generated by an online rock star name generator because the real “Nikki” requested we not use her name which, we might add, is so metal.

“The cupcakes,” says eight year-old Nikki Max when asked what she liked about her week at Tacoma Girls Rock Camp (TGRC). “And the goldfish, and the cookies.” Max and a group of 8 to 13 year-olds spent the first full week in August at Summit Olympus learning how to shred the guitar, slap the bass and make sick beats on the drums.

Casi Brown created TGRC. A lifelong musician, Brown began a similar program in Bellingham. “I wanted to empower women to learn instruments and tell their own stories,” she said. Brown, a graduate student in urban planning at the University of Washington, carries the title of executive director for TGRC.  “We’re volunteer run and this wouldn’t have been possible without generous support from the community.”

Volunteers signed up to provide music lessons to campers. Others donated instruments to the cause. “People lent us guitars, equipment and even a full-sized drum kit,” said Brown. “We kept most of it stored in our co-founders mom’s house.”

The TGRC received financial assistance this year from the Tacoma Arts Projects. This, and a tuition fee, helped cover the costs of putting on the program. Scholarships were available. Fifteen campers rocked out this year but Brown hopes the program will grow once word gets out. “It doesn’t matter if kids have experience, in fact most of the girls this time around had never played guitar or drums,” she said.

Campers jammed, but they also learned how to screen print and spent part of everyday riding skateboards. Alchemy Skateboarding setup ramps at Summit so the girls could practice their ollies and kick-flips.  Wrapped around this chorus were talks about the history of women in music and songwriting workshops.

Nine year-old Audrey Miller loves all types of music, “especially rap.” This last revelation came as a surprise to her mother Danica. When asked why she signed Audrey up for the TGRC the elder Miller said, “number one, because I needed child care and number two, because I’m always looking for ways to encourage my kids to have new experiences.”

Emma Rose is “Nikki Max’s” mother. Rose wanted to offer her daughter a way to develop her musical interests in a non-traditional environment.  “I felt like she has some natural talent that I wanted to explore,” said Rose. Max is very much her own person. She loved the skateboarding because “no one was bossing me around” and generally thinks “swear words are pretty great” even though it’s not clear whether or not she’s allowed to say them.

Campers were organized into bands. Once in these groups they were tasked with creating names and designing their own shirts. The four bands were: Speechless, Deal with It, the Los Angeles Pineapples and the Unbreakable Supergirls.

Anyone who’s seen VH1’s Behind the Music knows the process of creation can bet a little messy. At one point in the week Max’s band, the Los Angeles Pineapples actually broke up. The foursome got over their creative differences in time for the camp culminating event—a live performance of original music at Alma Mater. “I think it was an important lesson,” said Rose. “Collaboration can be hard and being creative with other people can be difficult but ultimately they persevered and created something really special.”

Audrey Miller hoists the sticks high over her head and taps out a quick “1,2,3,4” as the audience of friends and family lets out a series of encouraging woops and hollers. Miller’s bandmate in Deal with It lays down a thick bass line and the place starts grooving. Miller, who enjoys using her hand as a microphone, relished the chance to make music with other girls. “I also got to let out some anger by beating on the drums,” she said.

As for Max, she maybe didn’t like being on stage—and that’s okay. A valuable experience can be one that teaches us something about ourselves. At last check, Max’s mother reports her daughter is proudly wearing her Los Angeles Pineapples t-shirt. “She says it’s ‘special to her,’” said Rose. 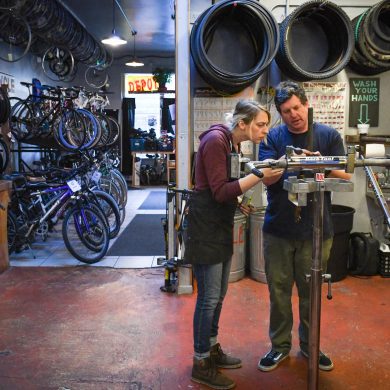