The Clever Tacoma Mall Design You May Have Missed

If you made a list of noteworthy examples of architectural design in Tacoma, the mall would probably not make the cut. That might be because it’s changed a lot in the last 50 years, but more likely it’s because you’re not Art Chantry.

“it was the first structure (complex) i’ve ever seen where the architecture and the logo/branding were THE SAME. it was a revelation and a marvel to my young mind.”

Art Chantry has been called the Godfather of Grunge, thanks to creating artwork for the likes of Nirvana and Soundgarden. He has an incredibly unique way of looking at things and often turns his magnifying glass toward his home town of Tacoma in his regular Facebook posts.

His writing very much mirrors his design style so here, in its raw and unedited form, is Art Chantry’s critique of the Tacoma Mall.

what made tacoma famous made a loser out of me…

when the Tacoma Mall was constructed in the mid 1960’s, it was what killed downtown tacoma. back in those days, malls were built to steal business away from active downtown shopping districts – just like WALMART does today.

the Tacoma Mall began a decline in the tacoma downtown that took ovvr 50 years to reverse – and then that reversal is tentative. we’ll see if it holds.

the DESIGN of the Tacoma Mall was pretty cool in retrospect. it was the first structure (complex) i’ve ever seen where the architecture and the logo/branding were THE SAME. it was a revelation and a marvel to my young mind.

the last photo (below) shows the Tacoma Mall Theater (a mainstay of my teenage years). it really killed off downtown movie theater traffic as well. but, note how the LOGO of the Theater echoes exactly the structure of the mall and the brand as well.

at the Tacoma Mall, the “TM” (short for ‘Trade Mark’) you saw everywhere really meant Tacoma Mall. beat that shit.

almost all of that branding conceit has been erased and removed over the decades by subsequent owners of the mall. additional new buildings ignored the design idea, too. but, enough of the old design thinking still exists at the mall to entertain those who bother to look for it.

Bonus bit: Art Chantry recently designed the poster for the 2019 Tacoma Film Festival, which will be October 3-10. His thoughts on that process, Tacoma, and more as captured by Taylor Hawkins… 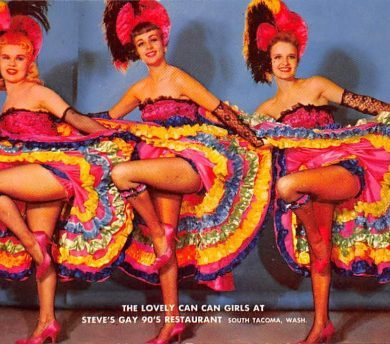