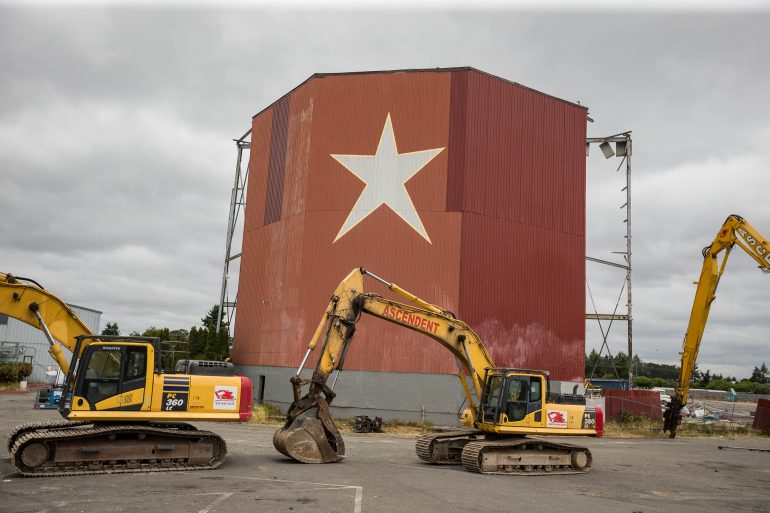 Say Goodbye to the Star Lite

The Star Lite drive-in/swap meet at 84th and South Tacoma Way is being torn down. Construction will begin soon after for a 244,285 square foot concrete warehouse and distribution building. Most of the small buildings are already gone. The towering structure that held the screen will be torn down as soon as the asbestos abatement crew is finished cleaning up the remnants of the screen itself.

Before demolition crews started work on the 12 acre property, they evicted 42 people living in shacks. According to one of the workers, the previous owner had been renting spaces to homeless people for some time.

The Star Lite is an odd sort of landmark. It’s impossible to miss if you’re driving by and it’s one of the few things on that stretch of South Tacoma Way that really stands out from the car lots and strip malls.

The giant goofy shaped star is not what anyone would call beautiful but it’s not exactly an eyesore either. Its sole purpose was to be noticeable and was, apparently, the best they could come up with back in 2002 after the old designs were painted over.

There’s something admirable in its simplicity. The retro-futuristic font on the marquee sticks out like a sore thumb but after lasting this long, it’s kind of endearing.

The Star Lite falls into a narrow gray area between nostalgia and apathy. When it was built in 1948 it was one of the largest drive-in theaters in the world with a screen measuring 39 by 54 feet. It operated as a theater until 1996. It’s been around for so long and it’s such a fixture of South Tacoma Way that at least some people would want to preserve it, right?

On the other hand, though, it’s been sitting there collecting dust and mildew for so long that just as many people probably drive by without a thought. Furthermore, a gigantic distribution warehouse could bring jobs to the area and it’s not like the swap meet was the most happening thing ever to hit the South Tacoma/Lakewood border.

If you’re feeling a twinge of loss, maybe it has more to do with the Star Lite as a symbol than as an actual landmark or institution; a proxy for the unwelcome changes coming to the area. Blocks of craftsman homes are being replaced with highrise condos, rent is increasing, traffic is worsening, and every piece of history that finds itself in the back of a dump truck becomes a martyr to the ongoing march of progress.

One neighbor who lives behind the Star Lite said he was glad it was all coming down. He complained about swap meet traffic on weekends and giant rats that he blamed on the untidy nature of the property. A few people walking by stopped to take pictures but no one seemed terribly upset about the situation. Still, that stretch of South Tacoma Way will now be considerably less colorful. One more piece of flaking paint replaced by polished concrete. 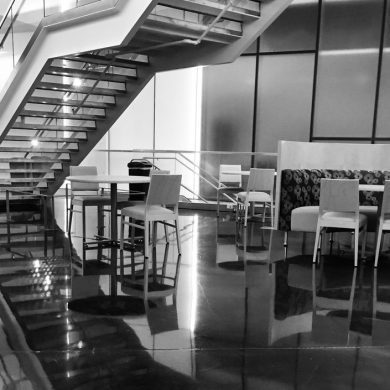 The Adjunct Crisis: Exploring the Dark Side of Tacoma Community College