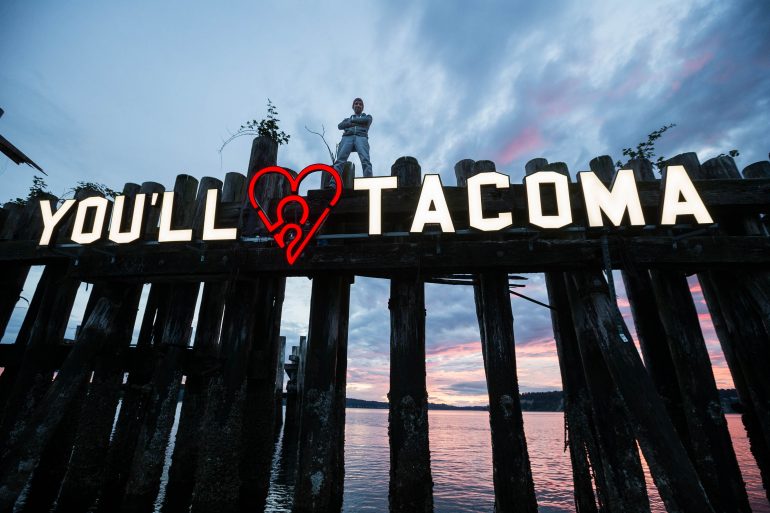 In 1909, the “longest shoreline electric sign in the world” was lit up at the Alaska–Yukon–Pacific Exposition. Its 20-foot-high letters proclaimed to the nearly four million visitors, “You’ll Like Tacoma.”

110 years later, almost to the day, I met up with electrician and artist, John James at the Beach Tavern at the far west end of 6th Ave. He and a group of friends were hatching a plan to recreate the sign—albeit in a scaled-down size—on the pilings of the old ferry terminal off Titlow Beach.

It was a bold idea with a tight timeline but, one way or another, I knew it would be interesting to watch.

John is behind a number of seasonal installations on the pilings at Titlow. I first talked to him last year after we shared a photo of his Jack ‘O Lantern set up. It all started after he saw someone else setting carved pumpkins out on the pilings the year before. John took it to the next level with the lights, though.

If you were at the beach around Christmas, Valentine’s Day, Saint Patrick’s Day, or Halloween, you’ve likely seen his handiwork. This project, however, was far more ambitious.

During normal working hours, John can be found crawling around in the walls and ceilings of various buildings in Tacoma doing his electrical magic. He worked on the recent Pantages remodel as well as the removal of the giant neon bubble letters on the old Toys “R” Us building.

Solar panels proved problematic in some of John’s earlier installations so the whole thing runs on battery power. This means he has to go out there once a week to remove the battery, charge it at home and reinstall it before the timer switches on between 9:00 and midnight every night.

Some of his past installations were close enough to shore that he was able to reach them with a ladder at low tide. This one had to be done by boat.

The tides are exceptionally high around the solstice and provided the best opportunity to mount the sign in this particular location. John was also careful to pick a spot that didn’t disturb any of the visiting swallows.

This installation came together in classic Tacoma fashion with a handful of friends teaming up to make it happen.

Sheets of plywood were cut up on his front porch, LED strips were installed on his kitchen table, and the whole thing was first laid out in the parking lot in front of his home down the road from Titlow. Visual Options donated the 15 individual CNC-cut letters and pieces that made the whole thing legit.

The bit that really sets it apart is the addition of the 253 heart. Kevin Vaughn was the one who suggested the 253 heart when he and John were talking about different ways to light up business logos. John tracked down Steve Naccarato who bought the rights to the design a while back. All it took was a Facebook message and a followup phone call and Steve was 100% on board.

From concept meeting to flipping the switch, the whole thing took a little over three weeks to complete. John and his friend CJ Cooper waited until high tide at 1:30 AM to install the heart and test the lights for the first time. The following day, CJ’s photo made the rounds on Instagram and Facebook and confirmed that the old fashioned slogan still resonates with Tacoma.

The following evening, a couple dozen people gathered to watch the official lighting. The timer didn’t kick on when it was supposed to but they had a backup plan in place: row out on a boat, climb up the pilings, and do it manually. I went along to get a few photos of the momentous occasion and to help hold the boat in place while John climbed off.

The few people who were there that night were reminded just why they like Tacoma. John and his crew put the whole thing together out of a simple unconditional love for this city. It even inspired fire dancer Tina Randall to put on a brief but captivating show on the beach as the tide came in after sunset.

The plan is to keep the sign up at Titlow for 30 days with a short break around the 4th of July for a little trip around Tacoma. The team has some fun ideas for what to do with the sign after that but no solid plans have been set.

After the original AYPE sign was set up in Seattle, at least two different signs were installed here in Tacoma along Pacific Ave. With the popularity of this new sign, it seems like we’ll probably be seeing more if it around Tacoma in the future.

Did you enjoy this article? It exists, in part, because of local businesses like Surge South Tacoma. Their support helps us be able to afford the time to tell stories about our City of Destiny. If you haven’t yet toured their coworking space at 5401 South Tacoma Way go take a look.

Be sure to tell the crew Grit City Magazine says hello. 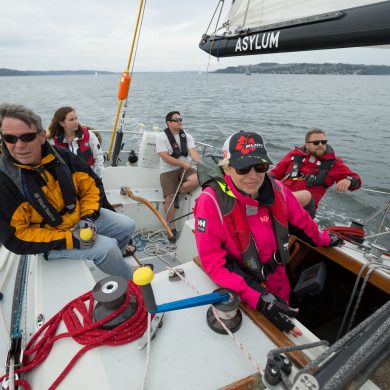 If You’ve Ever Wanted to Try Sailing, This Is Your Chance