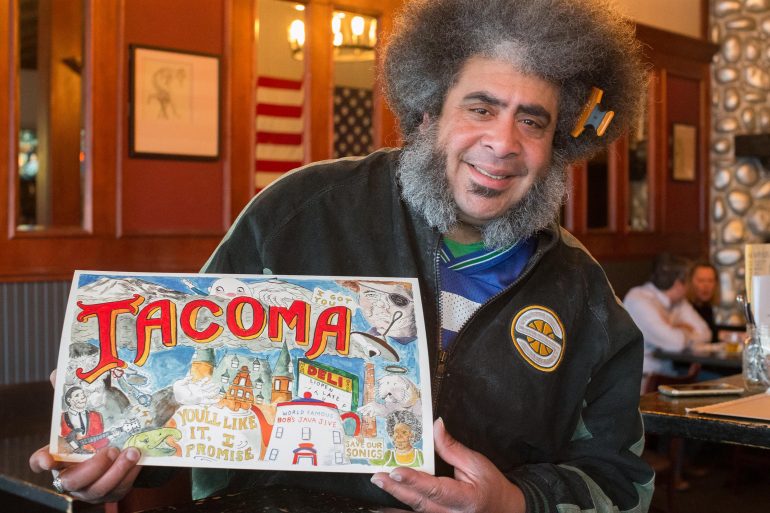 That’s how we ended up sitting down at Crown Bar on 6th Ave with the Tacoma legend. While there, “Sonics Guy” Kristopher Brannon kindly signed a poster for superfan Taylor Rushing, whose postcard-inspired Tacoma artwork will be the 11×17 print included along with our third hard copy magazine.

Kris, of course, knows all about the current Sonics situation.

“I thought basketball was going to bring hockey, but it looks like hockey is going to bring back basketball,” he tells us. “At least Key Arena will be technically NBA-ready in 2021, so hopefully the league will take notice.

And he’s pretty stoked about Tacoma Defiance and Reign sharing Cheney with the Rainiers.

“I’m so glad that Tacoma not only has professional baseball, but soccer—and women’s soccer! That’s going to inspire young women and girls. I’m into anything that brings sports to Tacoma.”

Kris is a born and raised Tacoman. He grew up in the North End and is now calling the Central area home.

The Sonics left in 2008, which Kris recalls as his “mourning period.” In 2009 he went to the Tax Day Tea Party Rally at the capital where got a lot of press “as one of the only brothers there” and had his own “protest of protests” trying to save the Sonics.

In case you somehow haven’t yet bumped into Kris, you can check him out in this short documentary from 2015:

Every once in a while Kris goes out in non-Sonics clothes, but knows that with his particular hair and beard styling going incognito isn’t really an option.

“They say Reno is the biggest little city in the world, but I say it’s Tacoma,” Kris tells us. “We’re a big city but, at least from my perspective, I know everybody in the city and everyone knows me. I’m not just saying that because I’m ‘Sonics Guy’—anybody can get to know anyone here. Tacoma’s big enough but it’s also small.”

His love for Tacoma runs just about as deep as his passion for bringing the Sonics back. It’s not unusual to see him at a city council meeting, or find him deep in conversation about how transportation is developing in Hilltop and the East Side, or the spread of homelessness.

He’s also not afraid to poke a little fun at our City of Destiny. A joke of his goes something like…

“Tacoma: Where 70 percent of new businesses are breweries and the other 30 percent are dispensaries. Yes, your city is trying to tell you something.”

If Kris were to give a bit of advice to someone new to Tacoma it’d be this: “We’re very welcoming, talk to the people. You can make friends easily but be willing to learn and respect the city.”

When I ask, “What don’t most people know about Sonics Guy?” Kris pauses for a moment before replying:

That being said, he’s happy to be called either Kris or Sonics Guy—just maybe not Kristopher, because that’s what his mom says when he screws up.

The best perk of being Sonics Guy? “People just being happy to see you. Just today someone came up and told me, ‘Thank you for what you do.’ I didn’t even know him. Never seen him before. But it’s great to have someone appreciate you.”

If you haven’t yet preordered hard copy 3 there’s still time to do so before we hit print next week. Grab one through our shop to make sure you don’t miss out.

*Just kidding. There’s only one Sonics Guy. But he likes us, so that’s good. 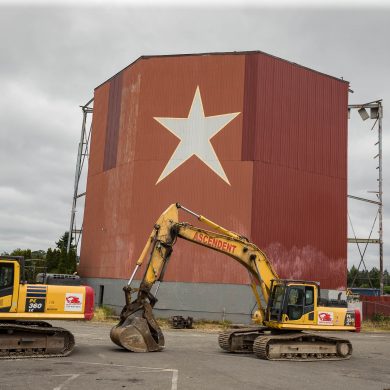 Say Goodbye to the Star Lite