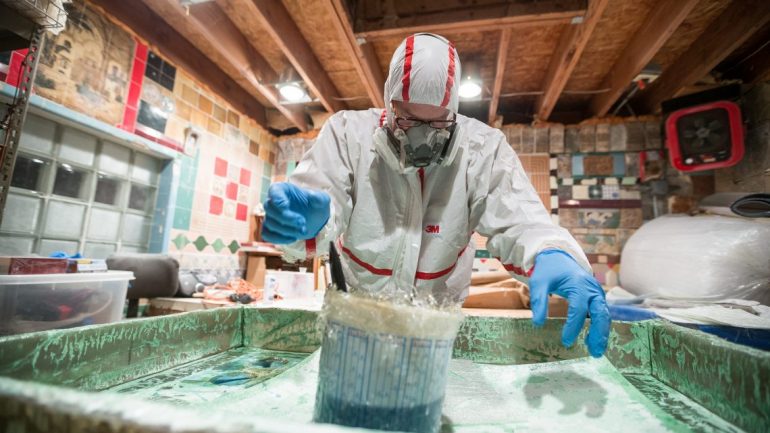 Life After Crawlrus: In a Tacoma Magician’s House “The TVs” Are Born

No one can know for certain who a magician would choose to live in their former home, but it feels only right that it ended up being Tacoma’s Steve LaBerge that moved into Ray Gamble’s place of residence.

Steve, you’ll recall, is an insurance agent by day and mad fiberglass artist by night. He’s the one responsible for the Crawlrus that was seen around the North End. He’s the one who made “The Slug” that’s now at Alma Mater. He’s the one now working on “The TVs,” and its his and wife Natalie’s house on North 30th that has those LED-lit creations out front.

If you’ve driven by and spotted them you’ve likely wondered what the hell the inside of a person’s house who has those as lawn art looks like. We were lucky enough to be recent guests at the LaBerge’s, and the tour of their space turned out to be more than we could have hoped for.

After being greeted at the door by Steve we were welcomed inside their home. Though it was dark out and we missed out on what is surely a killer view of Ruston Way and Brown’s Point, we were treated to a short tour of some of Steve’s (comparatively small) creations.

On another wall evidence of Steve’s longtime fascination with TVs was displayed.

But, aside from a few unusual pieces displayed on walls, the main floor of the LaBerge’s home followed the kitchen/living room/office script we’re all familiar with.

Then we went downstairs, and the magic began.

Steve and Natalie’s home was originally built in 1922, and among its early owners was magician Ray Gamble. It was aptly known as “Elephant House” thanks to Ray’s collection of elephant statues of all sizes. It was also the location of many parties.

Ray came into fortune (according to Tacoma History Live) by “figuring out a way to convert sawdust into a cellulose buffer and accelerant for explosives just before World War One.” He then “sold the patent to DuPont and then made millions moving waste sawdust from mills to the DuPont explosive manufacturing plant next to Camp Lewis.”

Ray’s home, complete with a stage and gambling pieces, welcomed guests such as Harry Houdini, Edgar Bergen, Will Rogers, and Orson Wells.

Beatrice Houdini, widow of the famous magician Harry Houdini, is pictured below visiting the home in 1941.

At a time when illegal slot machines were being confiscated and destroyed, the Elephant House boasted a roulette wheel and slots that could be hidden in compartments in the walls.

“There are definitely secret panels,” Steve told us as when we peeked in. “It’s a trip. Our kids would do shows sometimes but it’s never been used as much as it could be.”

Stepping into the backyard in present you’ll not only bump into Gamble’s elephant statues, but Steve’s creations and other bits of Tacoma greatness. Lance Kagey (whom you may know from Rotator Creative and/or Beautiful Angle) created a piece for the year of the horse Steve is now holding on to.

“It was valuable to me,” Steve told me as I nearly tripped over a fiberglass TV that was drying outside. When we spoke he had 14 made out of his goal of 20 total (plus a few spares to be kept on hand in case of mishap).

In a small shed off to the side of the yard he suited up in full hazmat gear to produce yet another fiberglass TV destined to be decorated by a local artist. He started out doing them in the home’s basement, but understandably he and Natalie couldn’t live with the fumes.

“This is the lab,” Steve told us as we stepped inside a shed just barely big enough to hold three humans and his production space. “What you smell now is nothing.”

As we chatted Steve suited up in a respirator and rubber gloves, then put on his jam. Zero 7 is the last CD that happens to work on his player, and so by default it’s what he fiberglasses by. Steve says he’s listened to the same album at least 30 times, if not more.

The resin mixture he pours on top of hastily cut squares of cloth has a blue hue. But, though Steve’s aware enough of Breaking Bad to get some Walter White references to his getup, the fun of the coincidental coloring is lost on him.

Why the fascination with TVs? One of Steve’s earliest memories is of sucking his thumb and watching the tube.

The upcoming project’s description further elaborates: “[TV] was a thing of my youth and perhaps yours as well. A big thing. So big that it literally shaped how we think and who we are.”

“Embellishments [from the artists] range from written words to objects affixed to the TVs’ surfaces. The embellishments offer a path for exploration into what TV has left with us, good and bad. Why did I watch that? What was the intended message? Do I really need more cornflakes? Do I like to watch with others? Was that an honest message? Do I want to be on TV?”

It took a repetitive labor of love to produce enough TVs to go out to artists, but as of the publishing of this article they’re starting to come back in.

A few recent posts from Steve’s Instagram show of the results of collaboration:

And a peek at what the final display will end up looking like:

You can expect the TVs installation to not only have plenty of LEDs (as the Slug does), but for it to have an interactive element. The plan is for the lights to respond when someone moves in front of the screens.

Alma Mater, which will be home to the TVs installation, will be celebrating its one-year anniversary in June. Connect with Steve via Instagram @atacomite to keep up with the latest on the project, and @almamatertacoma (Facebook link here) for their updates.

After being displayed in Tacoma, Steve plans to tow the TVs to Burning Man, where the Crawlrus once roamed. After that adventure it will return to Alma Mater as a permanent part of their art collection.

Photos by Sierra Hartman and courtesy of the Tacoma Public Library 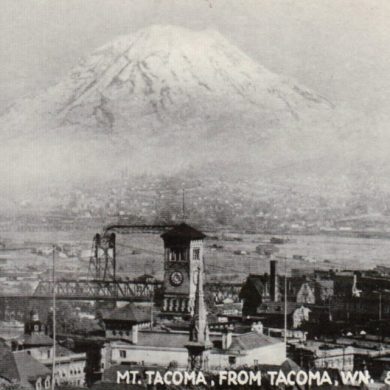 The 1930 “Tacoma Girl” Song Lyrics That Were Nearly Lost