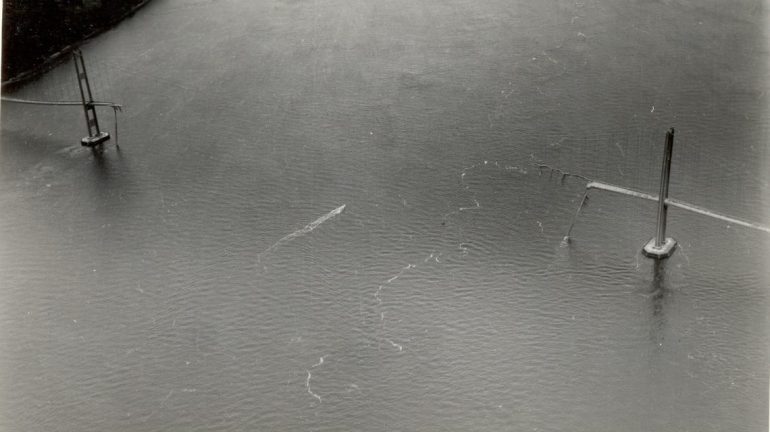 Ever Wonder What Happened to Galloping Gertie’s Broken Bits?

The image of Leonard Coatsworth’s car stuck on the swaying Tacoma Narrows Bridge known as Galloping Gertie might be one of the most well known from that disaster, but though it’s dramatic it does little to give viewers a true sense of just how large a span of the bridge collapsed.

Here’s a different view that Jason Kriess, who works for the Washington National Guard, recently came across. It gives even those familiar with the November 7, 1940 catastrophe a new perspective on the extent of the bridge’s collapse.

In this overhead view it suddenly becomes much clearer how far Coatsworth, among a handful of others, had to crawl on hands and knees to reach safety.

Seeing just how much of Gertie’s deck fell it seems only natural to next wonder what happened to all the pieces. Though the current in that area is known to be strong, explorations have taken place to find out.

For further geographic context, here’s what that looks like overlayed on Google Earth:

For the still curious, there are photos from dives down to Gertie online, as well as videos such as this:

Regarding the location of Coatsworth’s car, which fell with his dog, Tubby, inside of it when the bridge collapsed, the Washington State Department of Transportation has this to say:

Reporter Leonard Coatsworth, who lost his car and poor Tubby when Galloping Gertie collapsed, had trouble getting reimbursed for his loss. He sent in a claim, but six months passed with no news and no money. Finally, Coatsworth wrote a letter to the Washington State Toll Bridge Authority, pleading for a response. A couple weeks later, the WSTBA replied that they had never received his first request. More time passed. Finally, the WSTBA reimbursed Coatsworth $450.00 for the loss of his car. They had already paid him $364.40 for the loss of his car’s “contents.”

The exact location of Coatsworth’s car (with Tubby’s remains) is a mystery. The water depth near the East Pier where Coatsworth’s car landed is about 125 feet. But, the swift tides of the Narrows quickly moved the car away from Galloping Gertie’s ruins.

There are a number of places around the area where you can see recovered pieces of the bridge, such as the Washington State History Museum and Pacific Seas Aquarium at Point Defiance Zoo & Aquarium.

And it it appears that, at least for a time, bits of Gertie were up for sale. Though the vast majority of the “Tacoma Narrows Bridge Fun Site” no longer seems to be in working order, one can still see prices for pieces.

A small rivet from Gertie runs $44.95, while a large costs $66.95. Other pieces include tools, bolts, bits of memorabilia from the second Narrows Bridge’s opening in 2007—and quite curiously a “genuine autograph & photo of Elvis Presley’s famous wife, Priscilla Presley. Matted photo of her in a bikini, with a signed card.”

All items appear to come complete with a certificate of authenticity. 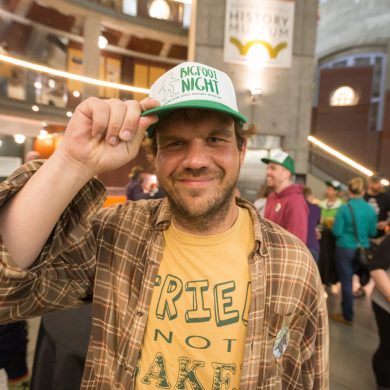 Here’s What Happened When Bigfoot, an Ecologist, and a Former Member of Nirvana Met up in Tacoma