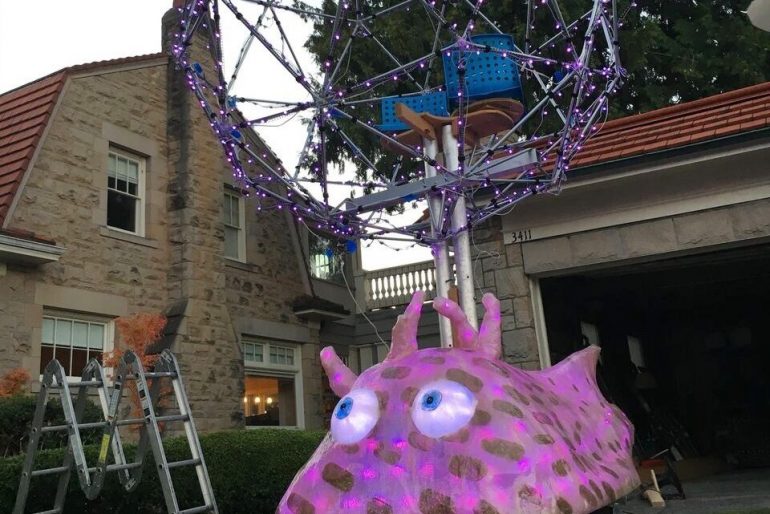 Curious What Happened to the North End’s Crawlrus?

If you’ve ever driven on North 30th and had a, “What the hell was that thing?” moment, you’ve surely encountered one of Steve LaBerge’s creations. An insurance agent by day,  he’s a mad fiberglass artist by night.

The home he and wife Natalie share was built by a magician in 1922. You can’t make this stuff up. But before we get to that, let’s start with the Crawlrus.

When we recently sat down with Steve we learned his creation was originally made to drive around at Burning Man, but it wasn’t the first art vehicle he loaded on a trailer and drove 640 miles to the Black Rock Desert.

He first took “Reclining Sofa With an Enhanced View,” which was essentially a pleather sofa with LED lights arced above for those who reclined to enjoy. Then came the 20-foot long Venetian gondola that sat atop a riding lawn mower and was steered with a tiller.

Other creations ensued, but the idea of using a lawn mower for mobility stuck with Steve. The gondola had been fun, but it was recognizable as a thing that already existed in the real world. What he really wanted to make was something no one had ever encountered previously.

Originally the plan was to build a “simple box” to fit over the lawn mower. People could then sit on top of the box and drive it. But then the friend of Steve’s that loves to work with LED lights mentioned a new interest in geodesic spheres—and the idea to have people sit atop the box in a giant dome that begins at eight feet off the ground was born.

At that point a simple box sitting below just wouldn’t suffice, and so Steve began to work on a fiberglass shell.

“I thought I’d just put one big eyeball on it to give it some personality, but Natalie looked at it and just said, ‘No. That’s too weird. Why not do two eyeballs?’ So I tried it out and it worked so well. It was just adorable.”

Part of the Burning Man tradition involves destroying your creation which forces artists to move on to something new. That meant the Crawlrus was destined for the landfill, but then Lance Kagey of Rotator Creative (and the Beautiful Angle project) reached out.

Steve and his creation were then tapped to be part of the launch of a guerrilla marketing project you’re surely familiar with—Live Like the Mountain is Out. That’s when the Crawlrus, complete with new logo on the back, started showing up in Proctor.

People would come flooding out of the bar at Knapps to ogle as they drove by. One patron gushed to Steve, “Man, I don’t know what that is but you’ve made my week—no, my year—no, my whole life!”

It isn’t exactly legal to drive a Crawlrus around town, for the record. This becomes especially true when traffic has to stop completely because the only way to get it to the very top of North 30th without the dome hitting trees was to drive it in the middle of the street.

“This one night we’re making the drive, and the mower just cuts out. I climb down and notice, out of the corner of my eye, a cop car park about a block away. They see us. They’re looking at me, I’m looking at them. And all I can think is, ‘Oh man. This is gonna be it. Hope they don’t pull out the taser because that would be so embarrassing.’ But then they just pull off the other way.”

About three weeks later Steve and Natalie were out again when they were passed by the police—one of which had a cellphone out to take a video. By the third encounter the officers were waving and smiling.

“At that point it felt like we were doing something good for the neighborhood,” Steve tells us. “People were coming out of their houses to see us and talk to one another. It was really a community builder.”

King 5 News even did a segment on the creation in August of 2017:

The Crawlrus was out in Steve’s driveway for about nine months, during which time passersby were welcomed to take an up-close look. Eventually though, the weather took its toll on the LEDs.

Currently the Crawlrus is in a storage shed, where a family of mice have made their nest in one of its eyes.

“It’ll be a hard one to part with,” Steve says of his creation. At the moment he’s not sure what the future holds for the Crawlrus, but with his and Natalie’s blessing we’ve created a little tribute to the North End spectacle. Check out the latest addition to our Tacoma sticker collection.

Steve hasn’t stopped creating since putting the Crawlrus away by any means. Head by North 30th currently and you’ll see what can best be described as the cousin of Crawlrus in his front yard, and you can find the Slug at Alma Mater.

Ready for more? Check out our second article on Steve, his home, and “The TVs” project by clicking here.

Photos by Sierra Hartman and courtesy of Steve LaBerge. 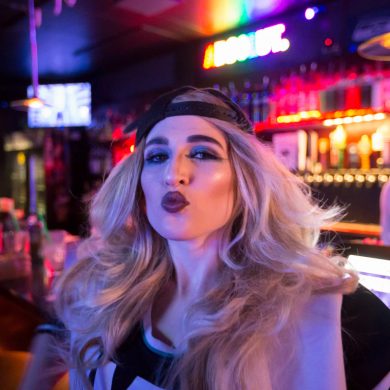 I’m Here, I’m Queer, Where Do I Hangout?