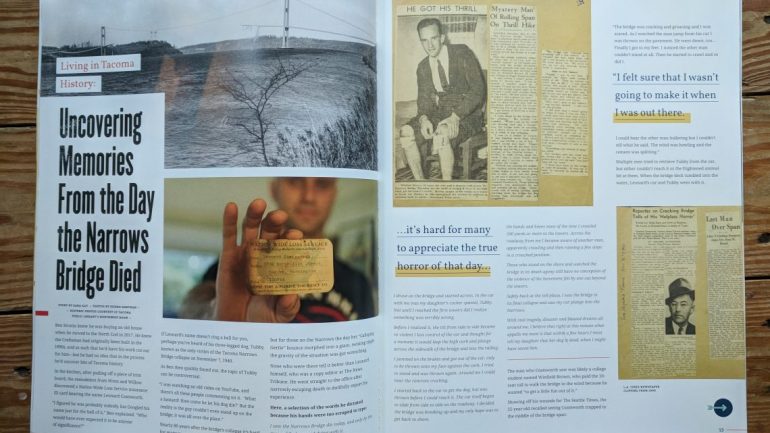 Searching for Tubby: The Tacoma Narrows Bridge Collapse’s Only Victim

It’s now been 78 years since the first Tacoma Narrows Bridge collapsed, but it was just a handful a months ago one local resident discovered he’s now living in the former home of one of the most notable figures from that day.

During the process of remodeling, owner Ben Strutin discovered Leonard Coatsworth’s car insurance card behind a piece of trim board in the kitchen. Leonard, quite possibly, was searching for this card after his car and dog, Tubby, plunged into the Narrows.

We met up with Ben this past summer to talk about how he unknowingly purchased a house connected to such dramatic local history and included the whole story in our first hard copy magazine.

Along with other decades-old scraps of paper found in the home were Leonard’s old license plates nailed up on the beams in the basement—presumably at least one from the sizable collection remains missing.

In the Tacoma Public Library’s Northwest Room files we turned up a photo of Leonard on the steps of the home, his trousers torn at the knees and shoes scraped from having crawled off the twisting bridge.

It isn’t uncommon to hear Leonard’s character lambasted by those horrified to learn he left Tubby in the car in order to save his own life. But in reading his personal account of the events of November 7, 1940, it’s readily apparent he felt the loss of his daughter’s three-legged cocker spaniel deeply.

Leonard, who was then a copyeditor at The News Tribune, went straight to the office after narrowly escaping death to dutifully report his experience. With hands too scraped and bloody to type, he dictated his story.

A selection from Leonard’s tale:

I saw the Narrows Bridge die today, and only by the grace of God escaped dying with it.

In the car with me was my daughter’s cocker spaniel, Tubby. Not until I reached the first towers did I realize something was terribly wrong.

I jammed on the brakes and got out of the car, only to be thrown onto my face against the curb. I tried to stand and was thrown again. Around me I could hear the concrete cracking.

I started back to the car to get the dog, but was thrown before I could reach it. The car itself began to slide from side to side on the roadway. I decided the bridge was breaking up and my only hope was to get back to shore.

Those who stood on the shore and watched the bridge in its death agony still have no conception of the violence of the movement felt by one out beyond the towers. Safely back at the toll plaza, I saw the bridge in its final collapse and saw my car plunge into the Narrows.

With real tragedy, disaster and blasted dreams all around me, I believe that right at this minute what appalls me most is that within a few hours I must tell my daughter that her dog is dead, when I might have saved him.

An arrow added to this photograph points out where Leonard’s car was on the bridge as it collapsed:

At least two other men tried to rescue Tubby from the car but did not succeed. One was even bit by the scared dog.

Dog lovers can now visit Tubby’s Trail Dog Park in Gig Harbor, where a tribute to the pooch is displayed. However, the image used on it is only a stock photo. Photos of the bridge’s collapse are easy to come by, but finding pictures of the Coatsworth family has proven to be difficult. To the best of our knowledge there are no known shots of Tubby.

It took 78 years for Leonard’s auto insurance card to turn up though, so perhaps there’s still a chance a photo of Tubby himself will surface.

If you know someone who has a connection to the Coatsworth family ask them to shoot us a message: editor@gritcitymag.com.

Want to read the full article? We did a reprint of our first magazine. It’s available to order now.

Images by Sierra Hartman Sara Kay, and courtesy of the Tacoma Public Library. 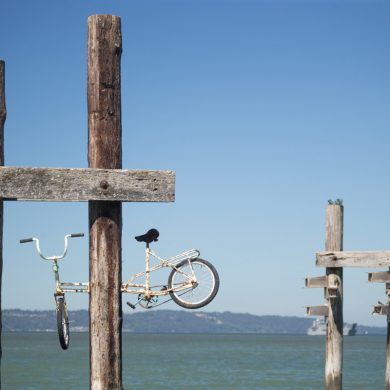