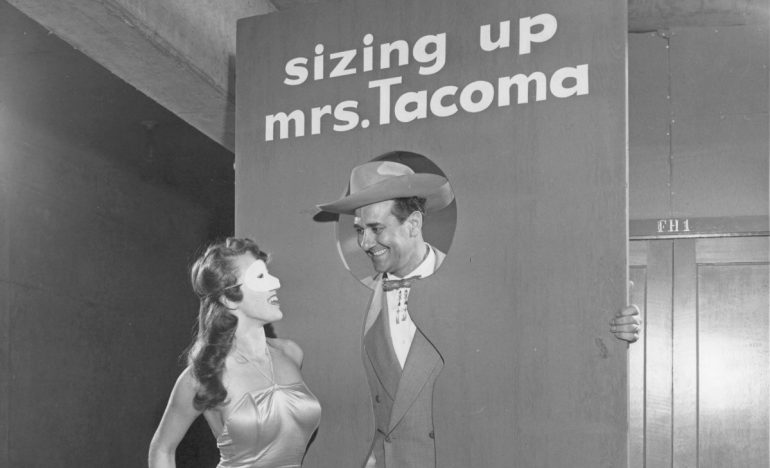 Here’s What It Took to Be Named the Perfect Mrs. Tacoma Housewife in 1955

From the ‘you can’t make this stuff up files’ comes a look back at the 1955 Tacoma Home Show, where there was plenty for guests to see at the College of Puget Sound’s field house (now the University of Puget Sound).

Along with displays featuring the latest in dishwashers and radiant heating options, a contest was held to find the perfect Tacoma Housewife.

The details of the contest are nearly as hard to digest as this image of a masked model standing next to a cutout of the perfect female profile shape. The sign, happily held by a grinning man, announces they’ll be “sizing up mrs. Tacoma.”

What did it take to earn such a title? A caption accompanying this image at the Tacoma Public Library elaborates:

Contestants had to be between 18 and 35, married, have at least one child and be Pierce County residents for at least 6 months.

They were judged on “housewifely arts” poise, charm and appearance. Finalists were tested on how quickly they could make a bed, how well they could iron a shirt, and the looks and appearance of their best baked goods.

Equally important was how well they had “trained” their husbands, judged by how well the males could change a diaper.

Although contest organizers repeatedly stated that height and weight did not matter, Mrs. Tacoma would also need to parade in a swimsuit and high heels.

The 1955 winner was Mrs. Lowell Doud, the wife of a lumberjack.

The other big Tacoma Home Show attraction in that year was the unveiling of the Master Builders model home, which had been dubbed “Casa Mañana” — the home of tomorrow.

Located in Lakewood, the home was on display March 22-27, during which an estimated 14,500 people toured through.

The house was a modern three bedroom tri-level designed by Donald Burr and built by Robert Good.

A model demonstrated the pull out, top loading dishwasher in the ultra-modern kitchen for photographers, who also captured the styling and asphalt tile floor of the recreation room.

Although it’s not entirely clear how long the Mrs. Tacoma contest took place, there were many years of a Miss Tacoma being named at the Home Show. A sampling of photos of the winners offers a peek the Home Show’s occasionally curious pageant history through the years…

1958: 17-year-old Marilyn Ganes, a drum majorette and junior at Franklin Pierce High School, poses with a sack of fake cash.

1964: Geraldine “Gerry” Gennow is photographed resting on a bar stool carved in the form of a “primitive” sculpture by Gale Haner.

1969: Dona Wenger jauntily demonstrates the many uses of a powered concrete wheelbarrow.

1972: Elaine Burt smiles while perched on the back of a llama. 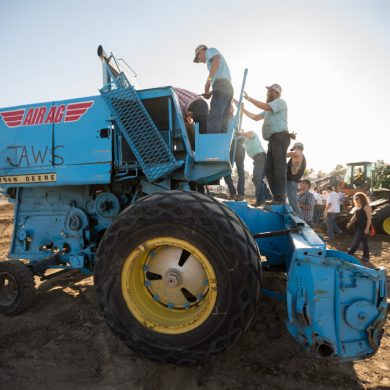 Get Out of Town: Photo Proof the Combine Demolition Derby is Worth the Road Trip