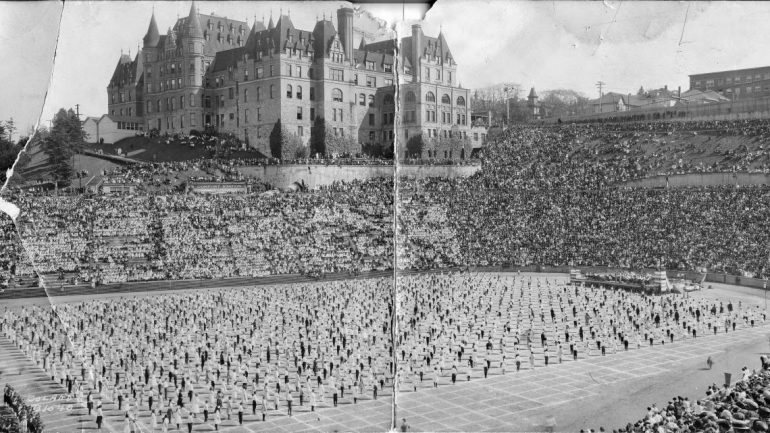 The Lesser-Known History of Stadium Bowl

When Stadium Bowl first opened in 1910 it was a pretty big deal. Theodore Roosevelt visited a year later and had this to say about it:

“I have visited, I think, most of the cities of the world, and there is not one of them which has such a stadium as this, situated with such an outlook as this; and it seems to me that not only have you done something in building this stadium, which will have an extraordinary effect upon the lift of your own city, but you have done something, also, which must have a very marked effect upon all other cities in the union.”

It was a project that brought the city together in an unprecedented way. The luster has somewhat waned in the last 108 years but it’s still an impressive structure by anyone’s definition. But unless you’re a student there or a hardcore stair runner, there aren’t a lot of opportunities to actually get down onto the field and check it out.

This Sunday, August 5th, is one of those opportunities though. Stadium Bowl will be open to the public at 9 AM for the Unleashed at Stadium Bowl event. You’re welcome to just come and watch, but you can also register to run that morning between 8:00 and 8:30. Before you go though, we thought we’d throw out some historical talking points to chat about while you watch people run up and down a whole lot of stairs.

From landslides knocking out the center seating to Heath Ledger prancing up and down the stairs, the basic history of Stadium Bowl is fairly well known. After a bit of poking around in the Northwest Room though, we found a couple interesting bits of stadium history that stood out from the rest of the headlines.

A dead guy rallied support for the stadium construction

When the idea of turning the gulch into an enormous stadium was first proposed, it was generally accepted in the community and local government, but the project lost traction for a time. That is until architect Frederick Heath had a grim but ultimately fortuitous run-in with a suicide victim in the gulch below the High School. As noted in Herbert Hunt’s Tacoma: Its History and Its Builders:

“One cold day in the late fall Heath was climbing about among the trees and brush of the gulch’s declivitous sides when he ran into the body of a man, hanging to a tree. This incident had considerable to do with encouraging public favor in behalf of the gulch’s improvement. It brought the unsightliness of the spot more closely to the attention of the school patrons, and the stadium idea grew.”

A Tacoma Times article from 1934 also noted, “The idea was all right but nothing happened until one day a discouraged laborer climbed into a tree opposite the school, tied a rope around his neck and jumped off. That decided the board to clean out the gulch, starting first with the idea of a play field. The stadium idea followed as a matter of course.”

Other reports claim a group of students from the high school found the dead man in the woods, but the outcome is the same.

Once the plans were settled to build the stadium, there was still the matter of filling in a sizable notch in Tacoma’s landscape. The bottom of Old Woman’s Gulch was originally below sea level and regularly flooded at high tide. The gulch cut into the Stadium District a fair distance and N. Tacoma Ave originally had a trestle spanning the ravine. The plan was to sluice the steep sides of the gulch to fill it in. This was complicated, though, by the fact that the gulch was populated by a number of old fishermen’s widows living in shanties amongst the dense forest of the gulch.

Turn-of-the-century Tacoma wasn’t exactly known for its sensitivity and all accounts of the story point to an unpleasant end to the situation. At least one woman steadfastly refused to leave her home until it was literally swept out from under her. Tacoma: Its History and Its Builders described the scene:

“Heath’s plan called for a fill of 147 feet, and 185,000 yards of earth was moved, all by sluicing. Several small houses built by squatters stood in the gulch, and some of the occupants were removed with difficulty. One woman became hysterical and remained in her hut until the water, mud and stones poured into her back door. The houses were buried.”

The world’s largest roof was almost built over the stadium

From a 1925 article in the Tacoma News Tribune: “E. Taylor Gardner, pioneer Tacoma Engineer and architect, has long visualized the Stadium roofed, enclosed and made over into a structure unlike anything that has ever been built on earth.”

There are reports of up to 60,000 cramped people attending events at Stadium Bowl in its early days. This is exceptionally impressive given that Tacoma’s population back then was only just over 80,000 and that the stadium was originally designed to fit 22,500. For comparison, Safeco Field has a capacity of just under 48,000. Even today, with modern marvels that would’ve baffled 1920s architects, it’s hard to imagine Stadium Bowl as a gigantic auditorium.

Furthermore, the fact that the space was to be completely open is just amazing. “With no obstructing pillars in the way and the beams 150 feet above the floor, Babe Ruth could not knock a ball to the glass roof,” Gardener explained.

The optimistic architect worked on Madison Square Garden in New York and pointed to the fact that there was “much misgiving about the feasibility of the project” before its eventual success. He then boasted that Madison Square Garden would have fit within the the stadium with room to spare.

The reasons for the project never coming to fruition aren’t clear, but the $775,000 price tag likely had something to do with it. It’s also easy to imagine what a disaster it could’ve been, given all the issues with landslides the area has had since it was built. 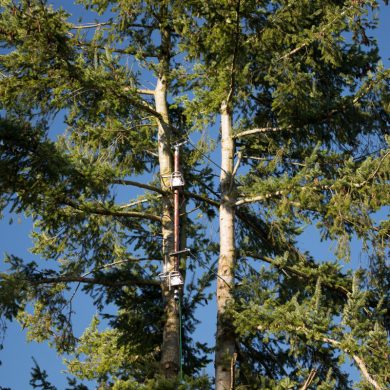 One of Tacoma’s Best Radio Stations Broadcasts From a Tree