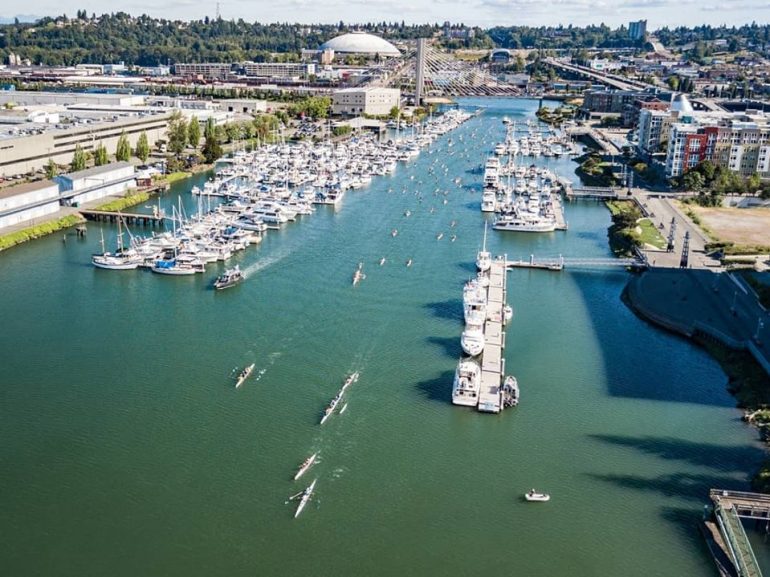 Gritty, Ridiculous and Inspiring: Get to Know Tacoma’s Seventy48 Race

If you happened to notice a hundred ragtag weirdos paddling furiously down the Tacoma waterfront during rush hour on a random Monday in early June, you probably inadvertently experienced Seventy48.

The event caught your attention on purpose. An inaugural pre-race to the epic Race to Alaska boating adventure that has been running between Washington and Ketchikan, Alaska since 2015, Seventy48 is sponsored by the same organization—the Northwest Maritime Center in Port Townsend—but it was dreamed up in large part by Tacoma’s Dean Burke, a local stand up paddleboarding legend who works for the South Sound Sports Commission.

The course travels 70 miles across 48 hours from downtown Tacoma to Port Townsend. They decided to start at 5:30 PM on a weekday and to kick off the race by tracing the waterfront from the Thea Foss Waterway to Owen Beach so Tacomans couldn’t miss it even if they wanted to.

There are very few comparable events anywhere in the world—open to all vessels, with one ultra-long push requiring racers to travel overnight, unsupported, through a large body of water—and it was significantly more successful than anticipated. The organizers noted that they expected 30 teams to register, but 130 applied and were accepted, and 117 showed up at the starting line. It received significant media coverage and drew cheering crowds at various points along the waterfront at the start.

Like its parent event, Seventy48 is a throwback to a type of ridiculous, hardscrabble, and mildly lawless adventure race that enjoyed a brief peak of popularity in the early 1900s. Different sport, but its best-known local spiritual analogue might actually be the Mount Baker Marathon, a race from Bellingham Bay to the top of Mount Baker that was held for a couple of years between 1911 – 13, and was recently revived.

Seventy48 allows no support along the way—you’re out there on your own—and has almost no rules. You have to travel by human power, you have to get your boat between Tacoma and Port Townsend, you have to stay out of shipping lanes, and you aren’t allowed to get arrested or get the race organizers sued. Beyond that, you can pretty much do what you want.

Participants have to submit an application that convincingly argues that they won’t get themselves killed. They can race in any type of vessel that floats, from dugout canoes to high speed rowing shells, and can camp along the way or do the whole 70 miles in a single push. The barrier to entry is low—$50 to apply plus $50 if you’re accepted, plus a few other obligatory fees—with a goal that anyone who’s capable can participate.

But for an old-fashioned madcap adventure, the event also managed to pull off modern, slick and professional. The pre-race events at the Museum of Glass featured international celebrities in the boating world, including Natalia Cohen, who was a member of the first team of humans to paddle the Pacific from the US to Australia on a four person boat.

The race was won by a two-man team that included Keven Olney and four-time Olympic medalist Greg Barton, and because part of every boat’s registration fees went into a winner-take-all pot, the first place team received a $11,700 prize purse.

The starting line at the Foss also told a thoroughly modern ecological story, as the former superfund site was picked intentionally as an illustration of the progress cities can make when they make the right decisions about their natural environment.

The event was both hardcore and self-aware of its own ridiculousness. Entrants ranged from serious to eccentric, and along with expensive racing boats there was a guy who made it the whole way in a bathtub sized dinghy, a guy in an aluminum canoe who called himself “The Last American Man” and used an old-school wooden oar, a team of 55 – 74 year old women from Port Townsend, and Ken Campbell, a Salmon Beach resident who attempted to complete the race on a boat he made out of pressed trash that washed up under the pilings at his house.

I was at the race chronicling the event for an outdoor adventure podcast that my wife and I make, called Boldly Went, and I’ve been around the outdoor and adventure racing world for awhile. The Seventy48 has all of the elements of an iconic event, and the organizational chops to make it happen.

With all first year events, a lot of people hang back to make sure that it won’t be a shit show, but both the start and finish lines were full of spectators talking about participating next year. The money involved is enough to draw top athletes, but the cost of entry is low enough for boaters to enter on a lark. It’s an epic adventure that you can finish with a bit of training and a couple of days off work, and all indications are that it’s going to blow up.

Gritty, ridiculous and inspiring, the event was a reflection of its parent cities and the water people who created it. With significant support from a variety of sponsors and organizations capable of pulling off big events, immediate traction among serious boaters, and a great story to tell in the process, the event might be the annual public spectacle Tacoma didn’t know it was waiting for.

Tim Mathis is living in the Lincoln District at the moment, and is the content director and chief blogger at Boldly Went, an outdoor adventure podcast featuring short stories from all kinds of athletes, from all over the place.

Listen by searching ‘Boldly Went’ on your favorite podcasting app. 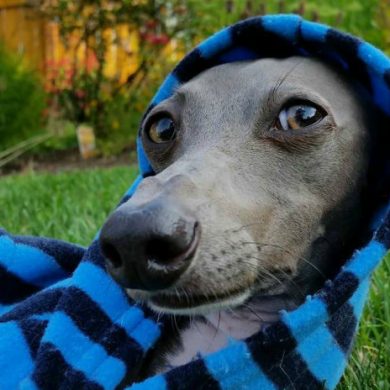 Meet Asher, the Tacoma Dog With 30,000 More Facebook Fans Than You