For Jonathan Hanks, art isn’t just about beauty—it’s about representation. The Tacoma native, who has been making art for years, is taking his UWT social work degree and putting it to good use. He is pairing it with his creative skills to create beautiful portraits of Tacoma’s immigrant and refugee community, and telling their stories through Youtube videos, alongside long-time Tacoma nonprofit Tacoma Community House. “I wanted people to feel accepted. I wanted to humanize marginalized groups. I wanted to help people feel seen and heard.”

Hanks approached Tacoma Community House with the idea for the portrait series, and the project was born. For the men and women he is painting, the project offers a chance to tell their story, sometimes for the first time.

Hanks has been inspired by his portrait subjects’ stories. “Immigration is so undervalued. Everyone here that I have talked to that has immigrated to the country, they just contribute so much.” He hopes the project can bring the community together. “I want there to be less walls and more connection”, he said.

For Phong Dang, who emigrated from Vietnam when he was a child, the project was a chance to share how grateful he is for the experiences he has had here in the U.S. In the 26 years he had been in the U.S., no one had ever asked him to tell his story. Now that they have, he wants to highlight all that his family has done for him.

He is thankful for the struggles his parents faced to bring him to the United States, including a stint in a refugee camp. “I’ve never understood why they left all their families and their homeland to come to a country that they know nothing about, without anything and anybody they know. They have to build their life for themselves and for us from nothing. Now that I’m older, I’m coming to an understanding that it was for us to have the opportunities and the options to have a better life. I’m grateful for their sacrifices and what they have done for us.” he said.

Dang, who works in real estate, sees his work as a chance to be a resource for others. “I got a chance. I came to a country where we didn’t have anything. Food was provided, housing was provided, and now I get to be in a career where I provide homes for people, and we just opened a restaurant down the street, so I am providing food for people,” he said.

Paul Many, one of the other portrait subjects and an immigrant from Laos who also spent time in a refugee camp, works at Tacoma Community House—and has since 1982. He says he has twenty more years before he wants to retire, however. He is hopeful that the project might help other immigrants to feel less alone, and maybe to seek services at TCH.

“Hopefully with my story, people can learn about our services. Maybe if they need help, like for example, jobs, education, they could come to our agency for help. This is a good place to start and then they can go on from there.” he said. Although Paul has played a variety of roles at TCH, he currently does mostly job placement. Like Dang, Many enjoys being able to help others the way he was helped when he first came to the United States. “My work is very meaningful to me, to be able to contribute, to make a difference in people’s lives. It might not be a whole lot, but I can give them a stepping stone and they can go on from there.”

Hanks has plans to continue the project with a total of 10 portraits, and says it continues to be eye-opening.  You can see other portrait episodes on Hanks’ Youtube Channel. When he is done with all the portraits, there are plans to display them at TCH. If you are interested in being involved with Tacoma Community House’s work, you can find volunteer opportunities here. 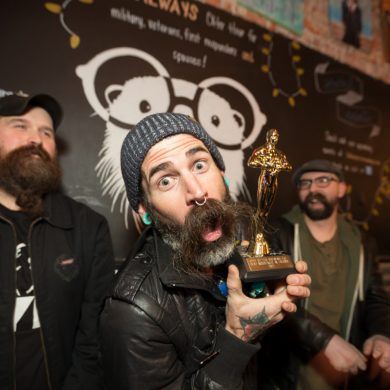 Tacoma’s Beard Competitions Have a Way of Growing On You