Tacoma may not be Nashville or Detroit, but it’s got its fair share of music history. The argument could be made, in fact, that the Grit City is the figurative birthplace of garage rock, and it’s inarguably the literal birthplace of one of America’s most beloved music celebrities.

From the early days of booster songs to garage rock, grunge, and mathcore, Tacoma’s been the stage for all kinds of notable music. The five-item list below is by no means an exhaustive account of Grit City’s contributions to American music, but it’s a good start.

Okay, now that I’ve grabbed your attention (and probably pissed a few people off) with that headline, allow me to qualify.

From 1987 to 1988, the Community World Theater stood at 5441 South “M” Street. In its short history, it hosted many acts that would later rise to prominence. Among them were Skid Row, Pen Cap Chew, Ted Ed Fred, and Bliss. Never heard of them? Well, that’s because I threw a zinger at you—all four of those names were used by Nirvana before they called themselves Nirvana.

On a darker note, Tacoma also contributed to Nirvana’s legacy in that the story behind “Polly” happened here. In 1987, a man named Gerald Friend kidnapped a 14-year-old girl coming back from a concert at the Tacoma Dome. He tortured and raped her before she escaped after Friend stopped at a gas station.

So, Nirvana may always be associated primarily with Seattle and Aberdeen, but the Grit City is where they played some of their earliest shows and where they took on their moniker.

Music history is a slippery beast, and precision in the beginnings and endings of things is generally cloudy at best. Still, a solid case has been made by many that the Sonics were the first American garage rock band. They were certainly one of the most influential. The Eagles of Death Metal, Kurt Cobain, and the White Stripes have all cited the Sonics as a major shaping influence.

The Sonics were originally composed of drummer Bob Bennett, guitarist Jerry Roslie, keyboardist/lead vocalist Jerry Roslie, sax and harpist Rob Lind, and bassist Andy Parypa. They were good musicians, but so were their competition. What set the Sonics apart from the other acts was their aggressive approach to performance. As Roslie told OCWeekly in 2009, “We were all in the same boat, but our style was different. We were more forceful about it. They played good, but they played kind of pretty. We’d get up there and turn everything up and start screaming.”

If you need evidence of the band’s sonic savagery, just listen to “Have Love, Will Travel.” This was recorded in 1965, long before the technological innovation enjoyed by later bands, but they attack the song with a force you’d be hard-pressed to find anywhere else, even today.

The Sonics’ original lineup broke up somewhere around 1967. Some of the guys went to school, some joined other bands. Lind, the sax player, became a fighter pilot and ran combat missions in Vietnam. Like many landmark acts before their time, they never broke through commercially but their legacy helped shaped American music for generations to come.

“Have Love, Will Travel” was featured on the band’s debut album Here Are the Sonics. It’s been cited by rock critics and historians as a landmark of Seattle music history because it was recorded there, but fuck that—the Sonics are a Tacoma product. And there’s never been another band to more nobly capture the gritty heart of the city.

As Peter Blecha so beautifully puts it in his book Sonic Boom!: The History of Northwest Rock, the Sonics “were the unholy practitioners of punk rock long before anyone knew what to call it.”

Sometimes they’re called simply the Wailers, sometimes the Fabulous Wailers. Whichever moniker you choose, the important thing is that they wail.

The band’s heyday started in 1959 with their signing to New York’s Golden Crest record company. The band was composed of five members, including rhythm guitarist John Greek, lead guitarist Richard Dangel, keyboardist Kent Morrill, and drummer Mike Burk. Greek signed their initial contract because he was the only band member over 18 years old. They were all friends at Stadium High.

They were initinally an instrumental band, and they produced two major radio hits that way, with “Mau Mau” and “Tall Cool One.” Their December 1959 LP, The Fabulous Wailers, is today considered a high water mark of popular instrumental music. The Wailers were clearly poised for the BIG Big Time, but they may have jumped the gun. When Golden Crest asked that they move out to the East Coast so they could be properly managed, the band had to refuse, mostly because of their age. For all their talents, they were still just high school kids.

The band didn’t let this turn of events stop them. They kept touring. Eventually, they brought in a 13-year-old girl named Gail Harris to sing. Seems a little young for a vocalist, but just listen to this young lady’s pipes and you’ll see why she was chosen. Lawrence F. “Rockin’ Robin” Roberts (formerly of another historically important band called the Blue Notes) also moved in with the Wailers.

The problem was that the band was still signed to Golden Crest. Efforts to continue recording while avoiding legal problems created tension in the band and, ultimately, division. Greek, who had attracted some ire over the “beer budget” he steadfastly maintained while traveling solo through California to promote the band, and over his rivalry with Roberts, was the first original member ousted.

The band kept raging, though, with a young Jimi Hendrix (you may have heard of him) as an early admirer. In 1961, the band devised a way to get around that pesky Golden Crest contact situation—they started their own record label, named Etiquette Records. Etiquette Records, by the way, was the label that first recorded the previously discussed Sonics.

The Wailers’ biggest hit was in 1959 with “Tall Cool One,” which reached 24 on the R&B chart and 36 on the Billboard Hot 100. They also had a big local hit with a 1961 version of “Louie, Louie” (which was released by Etiquette and ascribed to Rockin’ Robin Roberts rather than the Wailers), which predated the 1963 Kingsmen version that is today the most recognizable performance of the song. The Kingsmen, in fact, took their version from the one crafted by Roberts and the Wailers.

Like all good things, the band eventually petered out, but not before they’d made their mark. As a side note, Rockin’ Robin Roberts died in a car crash in 1967 at only 27 years old. Not only had he made his mark in music, but he’d also earned a master’s degree in biochemistry from University of Washington.

Not sure if you’ve heard, but Bing Crosby was kind of a big deal.

Since his music career started in 1926, he’s sold an estimated one billion records. His version of Irving Berlin’s “White Christmas” alone has sold over 100 million singles and is in the Guinness Book of World Records as the highest selling single of all time.

His time in Tacoma may have been relatively brief, but he’s one of Tacoma’s own.

Neko Case was born in Virginia and lived all over the place, but she’s stated that she thinks of Tacoma as her hometown. She lived here for a few years, working in Bob’s Java Jive and the Community World Theater. She also tried to get a job at Frisko Freeze but claims that they told her they didn’t hire females. For a time, Case was also a go-go dancer for another great Tacoma band named Girl Trouble.

Case recorded songs titled “South Tacoma Way” and “Thrice All American”, both of which beautifully capture the pride, hopefulness, hopelessness, and urban decay that embodied Tacoma in the 90s (and for most of its history before the rebirth of the 2000s).

Case’s attitude and humor are probably also reasons why she resonates so much to this day with Tacomans. In a 2011 interview with The Stranger, she lamented her three-legged cat Wayne’s death-by-coyote with the declaration, “But he lived hard and balls-out, so I think he would have wanted it that way.” It’s exactly the kind of gallows humor you’d expect from a Tacoman.

Case is still making music, but she lives in Vermont and doesn’t record new stuff about Tacoma anymore. Still, this unique and talented woman will probably always be a darling of Tacoma, at least until the Gen Xers die off. And if later generations forget her, then that’s their own damn fault, because Case captured Tacoma about as beautifully as anyone is ever likely to.

Five is Just a Start

Girl Trouble, Botch, Diane Schuur, and many more… Tacoma’s produced many interesting and notable musicians. It’s also produced quite a number of interesting venues, from Bob’s Java Jive to the aforementioned Community World Theater. Such an exhaustive list is beyond the purview of the present assignment, but if you’d like to read more, just let us know. Until then, rock on, Tacoma. 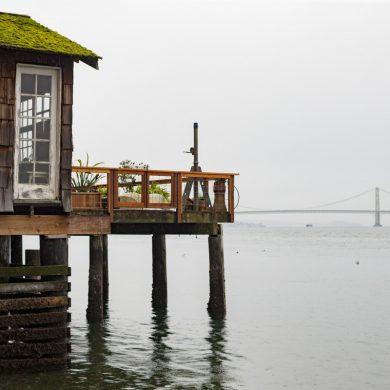 Ever Wonder What It’s Like to Live at Salmon Beach?