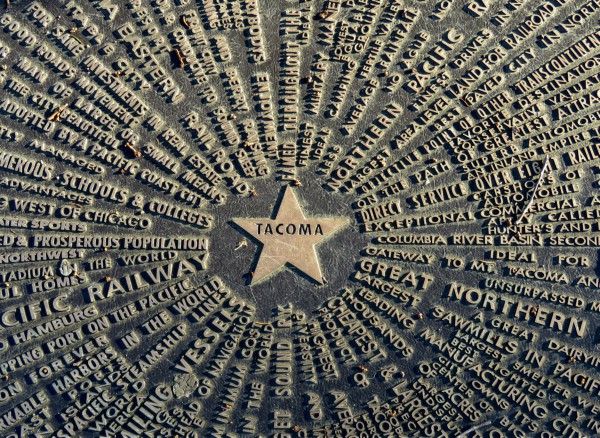 Today you’ll find a statue of Mason in Proctor, just outside the Wheelock library. Those who shake his outstretched hand are said to be getting a boost of luck from the man who became Tacoma’s biggest promoter.

Mason made his fortune advertising our city’s strengths in papers across the country. His most famous advertisement was an illustration he called Tacoma’s Star of Destiny, which was a star-shaped illustration comprised of over 100 bragging points.

During his years in our area Mason donated Tacoma’s first public library, built the first street car line from downtown to the North End, and developed several major buildings, including the first Elks lodge — as well as built his own personal mansion. One notable gift is what we today know as Puget Park, an area which Mason initially deemed unsuitable for construction, but at the same time recognized the addition of a park boosted the resale price of all the properties surrounding it.

Mason’s personal mansion was comprised of 36 rooms and served as a luxury model for a neighborhood he hoped to develop. It cost $86,000 to build in the late 1800s, and was located at 4301 North Stevens.

In the panic of 1893, Mason, who has been noted as a person of true integrity, made good on his vow to personally buy back houses from anyone who could no longer afford their payments. He lost all of his money in the process. He was 37.

Mason’s mansion and its location have been through many changes throughout the past 100 years.

In 1893 it was sold to Whitworth College. When the college moved to Spokane in 1913, John P. Weyerhaeuser bought the property, then demolished the mansion to build Hardaway Hall. At that time, the sandstone columns from Mason’s original mansion were repurposed to become part of the new landscaping.

The Northwest Baptist Seminary, which currently occupies the site, donated six sandstone columns that can be seen today standing on each side of Mason in the plaza in Proctor.

Mason’s ability to envision a thriving city where only wilderness existed made his legacy, and today many credit him with nicknaming Tacoma the “City of Destiny.” 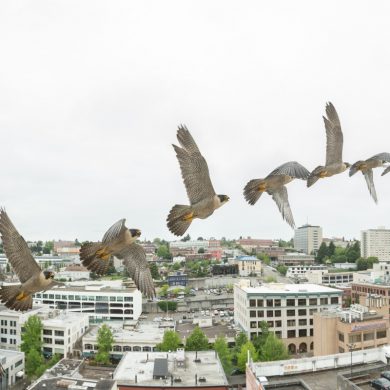 An Introduction to Tacoma’s Peregrine Falcons