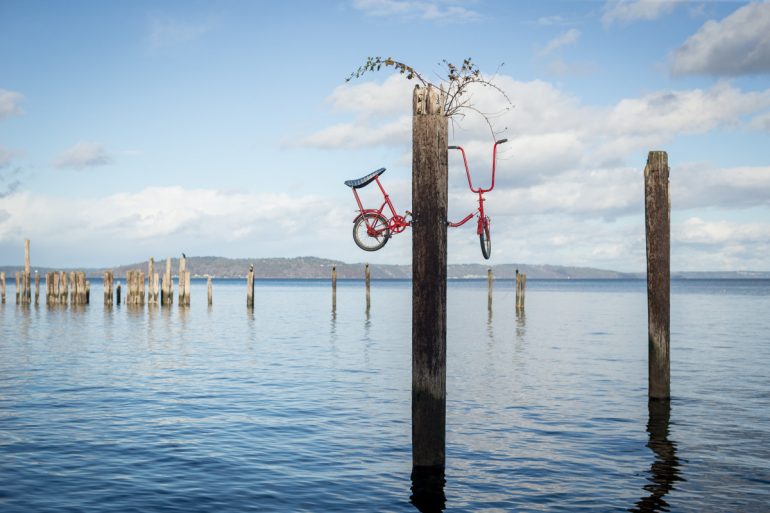 The locally famous Piling Bike near Dickman Mill Park has a new friend. This one, further northeast near Cummings Park, is a similar type of folding bike but has more than that in common with its rustier counterpart. A closer look at the bright red banana seated bike reveals some details that point to a common theme. This gets a little convoluted so stay with me here.

The only clue as to the origin of the old piling bike is a faded and peeling sticker that reads “Caravansary.” The bike was put up some time in 2014 and the art theme for Burning Man 2014 was Caravansary. The new piling bike also has a sticker which is somewhat easier to read. The words “Radical Ritual”, among other symbols, correspond to 2017’s Burning Man art theme. LED lights strung along the ape-hanger handlebars further imply its former life as a playa bike. So unless it’s a damn big coincidence, it seems fairly likely that they were put up by the same person/group of people.

The last piece of the puzzle is a mantra written in black marker on the front fender that reads, “By grace I live. By grace I am released.” This is the main point of lesson 169 in A Course in Miracles. The general spirit behind the lesson is one that could very easily be applied as a new year’s resolution. Which might have something to do with its mid-winter installation.

According to recent Instagram posts, we can see that it’s only been there for a few weeks at the most. It was there on New Year’s Day but it wasn’t there in the next most recent photo of the pilings from December 2nd. Extreme high tides often come late at night around this time of year which would give someone with a boat plenty of time to bolt it up without being hassled by nosey passersby.

So are we any closer to finding out who actually put the bikes in the pilings? A little bit. Now that it’s clear that the first bike was more than the result of a “Hold my beer” moment, it doesn’t feel right to totally pull back the curtain. I left out a couple other key things I found because, while secrets are fun to investigate, I also think a certain amount of mystery is important in life. And at the end of the day, it is just a bike stuck in a piling. 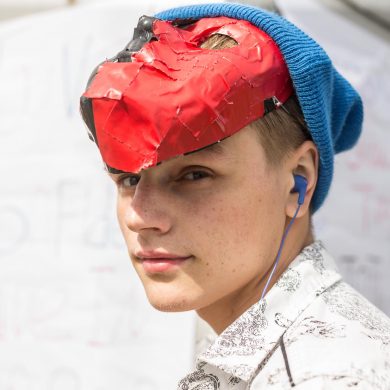