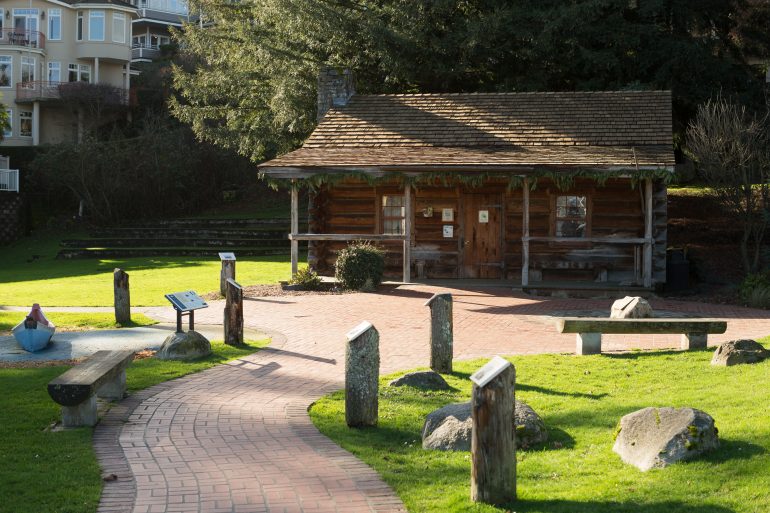 A Cabin, a Beard, and a Pioneering Spirit: The Story of Tacoma’s Founding Father

What’s the best Christmas present you ever received? For Job Carr, it was probably finding the 138 acres that would become the city of Tacoma, which he claimed on Christmas Day of 1864. Job Carr was not the first resident of the Tacoma area—the Puyallup Tribe had been living in the South Sound for thousands of years.  By the time that Carr arrived, though, the tribe had already been moved onto reservations following the Treaty of Medicine Creek. The Executive Director of the Job Car Cabin Museum, Chris Uebelhor says, “We emphasize in all of our tours and programming that Job was not the first person in the region, but the first permanent and successful Euro-American settler of Tacoma.”

Carr was born in Gloucester, New Jersey, and came to Tacoma by way of Indiana and later Iowa. He and his wife lived in Indiana together, and in Iowa he owned a fruit tree nursery. Carr, a civil war vet, came west when he was 51 years old after a divorce from his wife. Eventually his children and ex-wife followed but at first, Carr lived in a cedar-bark shelter with only his cat while he built his cabin. Carr was not the first European in the area—Nicholas Delin, a Swede, arrived in Commencement Bay in 1852, but the area was abandoned during the Indian War of 1855-1856.

While Carr wasn’t Tacoma’s first resident, he was a very active one. He was the city’s first postmaster and built its first polling place. He spent the rest of his life in Tacoma, working as a millwright, a painter, and other jobs. His cabin, located in what is now Old Town, served as a meeting place and haven for visitors to the growing city. Carr pushed hard for his plot to be the terminus of the railroad. While eventually Northern Pacific placed their terminus a few miles away, Carr’s determined belief in Tacoma didn’t go unnoticed. Around him sprung up a bustling community, including the still-standing St. Peter’s Church, now the city’s oldest existing building and once the site of the Western hemisphere’s oldest bell tower. Today, a replica of Carr’s Cabin sits only a couple blocks from where the original one stood, serving as a historical record of Carr’s time.

The cabin’s museum offers activities for Tacomans of a variety of ages; adults can learn about the history of the city from docents, and kids can play with pioneer toys and other interactive exhibits. Uebelhor says, “Our annual Pioneer Days Festival in September is the Museum’s big annual event with pioneer music, arts, crafts, and demonstrations in Old Town Park. Children can try a variety of hands-on activities like panning for gold and compete in old-fashioned games like tug-of-war or gunny sack races. But every visit to the Cabin is fun for children with interactive exhibits that help kids imagine life in the past. You’ll often find children “cooking” a meal for their family by the hearth, testing out the rope bed, or mesmerized by the wooden pioneer toys.” Local elementary school children often come to the cabin for field trips, and the cabin also provides materials to local schools for history curriculums.

Interested citizens are encouraged to get involved with the museum. Although donations are gladly accepted, Tacomans can also give their time. Uebelhor says that “We are always seeking greeters, tour guides, musicians, living history performers, folk artisans, and storytellers. We welcome volunteers of all ages, interests and skill levels. Stop by the museum to talk with us about how your skills, interests and availability might match with our volunteer opportunities.”

Uebelhor believes that Job Carr represents the qualities which now make Tacoma such a special place to live. “If anyone had grit it was Job! He had a DIY attitude, pioneering spirit, and willingness to take risks. He had great pride in his city and contributed to its betterment. One really can’t fully understand the City of Tacoma’s history without knowing the story of Job and Old Town,” he says. Carr passed away in 1887, but these days risk taking, a can-do attitude and a devotion to community keep the City of Destiny running smoothly, so Job Carr would probably be pleased with what his city has become.