The Strange History of the Tacoma Totem Pole

Nestled in downtown Tacoma in a narrow park stands a totem pole. At one point, it was brightly painted, but the paint is faded. Graffiti is carved into the base. At the top sits an eagle with wings spread, as if surveying the port below. Behind it, a steel pole braces the rotting wood. For most people passing through Fireman’s Park, the Tacoma Totem Pole is merely a curiosity, but its story is inextricably woven into the history of the City of Destiny.

Tacoma at the turn of the century was a thriving young city sitting at the terminus of the Northern Pacific Railroad and home to the largest and busiest port in Puget Sound. Gold was discovered in Alaska a few years earlier and would-be prospectors were coming from all over the world in hopes of striking it rich.

Around that time, Seattle started marketing itself as the gateway to Alaska. In 1899, in an effort to bolster the city’s image, a group of Seattle civic leaders cut down a totem pole in a Tlingit village in Alaska and erected it in Pioneer Square. The totem pole soon became synonymous with the city and Seattle started to receive national attention, which brought the simmering rivalry with Tacoma to a boil.

“Tacoma is the older city. It boomed first with the railroad,” said Lauren Hoogkamer, Assistant Historic Preservation Officer with the City of Tacoma. “And as Seattle started to rise, they started to be in competition.”

Among the Tacomans annoyed by Seattle’s increased prominence was William F. Sheard. Sheard was an arctic explorer, hunter, collector and salesman who owned a curio shop in downtown Tacoma that specialized in furs and Native American artifacts.

“I got so tired of reading about [the Seattle Totem Pole] in every magazine and paper,” Sheard later wrote in a letter to the Metropolitan Park Board. “I made up my mind to get a larger and better pole for Tacoma and not to steal it, either.”

Working with Tacoma banker Chester Thorne, Sheard raised $3,000 for the project. A cedar trunk was procured by the St. Paul and Tacoma Lumber Company and two anonymous artisans were hired to carve it in their lumberyard on Vashon Island.

It was unveiled in May of 1903 — the day before President Theodore Roosevelt was scheduled to visit the city — and placed outside of the Tacoma Hotel at the corner of South 10th Street and A Street. Towering over downtown at 105 feet tall, it was the tallest totem pole in the world at the time. Over the course of several restorations, it was lowered it to 72 feet — not counting the portion of the pole that’s underground — but still remains among the tallest totem poles in the world (Today, the contenders for the title of world’s tallest totem pole are a 173-foot pole in Alert Bay, B.C., a 132-foot pole in Kake, Alaska, and a 140-foot pole in Kalama, Washington).

When it was first shown to the public, the totem pole was widely praised for its deep relief carvings. In contrast to its muted appearance today, it was brightly painted and crowed with a halo of 18 electric lights circling the eagle’s head. Whenever a bulb burned out, a volunteer had to climb the pole barefoot to change it.

The totem pole was a hugely successful tourist attraction and was so recognizable that it even made it into a silent film. In the 1920s, budding producer H.C. Weaver built a movie studio on five acres near Titlow Beach. Funded in part by Chester Thorne, Weaver made three movies in Tacoma, the most famous of which was Eyes of the Totem, a thrilling melodrama about greed, murder and Klondike gold. The 1927 film prominently features the Tacoma Totem Pole, where the protagonist, Miriam, lives as a beggar and searches for her husband’s murderer.

Over time, the totem pole’s star power faded. In 1952, an article in the Tacoma News Tribune criticized it as “grotesquely carved and colored, which every few years gives the Metropolitan Park Board a pain in the neck, to say nothing of the pocket book, when it has to be repainted.” The pole was moved from its original location to South 9th and A Street in 1954 and to its present spot in Fireman’s Park in 1974 to accommodate the construction of I-705.

In 1975, the Tacoma Totem Pole was designated a historic landmark, but it continued to be surrounded by controversy. Totem pole carving is not part of any Puget Sound tribe’s tradition, leading many to argue that the pole perpetuates false stereotypes. Beyond that, no one has been able to definitively connect the style of the pole to a specific tribe in Alaska or British Columbia. Historians have spent decades trying to decipher its origins and the key to figuring it out hinges on solving the mystery of who carved the pole.

The dedication plaque claims that Alaskan Natives carved the pole, but there is reason to doubt that. The $3,000 fee is an enormous sum of money; far higher than what Native artists were typically paid at the time. On top of that, the style of carving doesn’t match Tlingit or Haida styles. Dr. Robin K. Wright, professor emerita at the University of Washington and an expert in Native American art, believes that it’s more likely that the pole is the product of white men attempting to reproduce traditional motifs from photographs and drawings.

“It’s kind of weird that this artifact came to symbolize the Northwest and the tribes, when it doesn’t have anything to do with the local tribes,” Hoogkamer says. She has a different interpretation of the Tacoma Totem Pole’s legacy. “That’s not what it’s about. It’s about the boosterism of the time and the exposition mentality that people in Tacoma had.”

In 2013, engineers discovered that the then 110-year-old pole was highly deteriorated and in danger of falling. After a lengthy debate over the totem pole’s place in Tacoma’s history, the city ultimately decided to save it.

A year later, Hoogkamer discovered a copy of Eyes of the Totem, long thought to be lost, at the Metropolitan Museum of Art in New York City. The film was restored and re-premiered in 2015 at the Rialto Theater. Up on the screen, in black and white, the Tacoma Totem Pole stood as it did in the time of William F. Sheard and Chester Thorne. Before restorations reduced its height and weather peeled away its paint; a reminder of Tacoma’s feud with its northern neighbor and of a moment in history when its citizens took it upon themselves to sell their beloved city to the world.

Images by Sierra Harman and courtesy of Tacoma Public Library 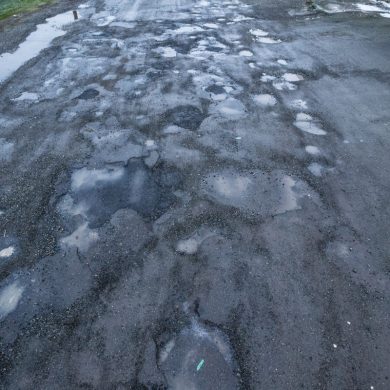 Think Your Potholes are Bad? Check These Out