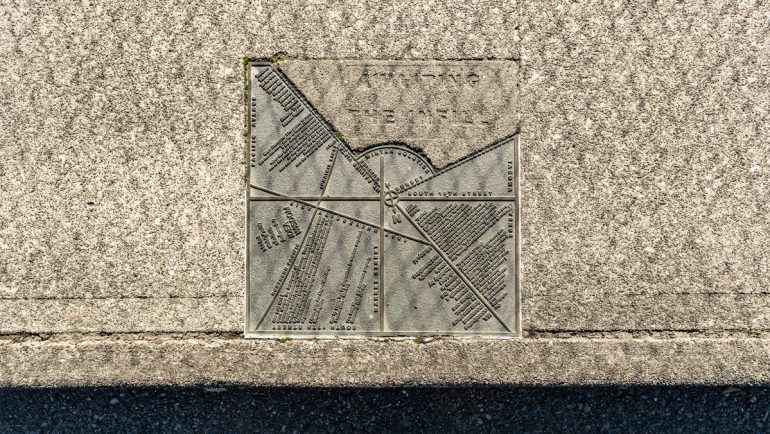 December 21st is the winter solstice and, according to a cryptic sidewalk plaque in downtown Tacoma, sunrise on that day at 19th and Market is the time and place to be if you want to take a peek into the world of the dead.

Other parts of the large bronze plaque reference various indigenous names for Mt. Rainier, quotes from Maya Angelou, Plautus, and Seneca, a description of life at Tacoma’s former Japanese Language school, and an explanation of an architectural concept known as Ma.

A closer inspection reveals that the plaque is also a map showing exactly one square mile of surrounding land, minus a portion with “AWAITING THE INFILL” stamped in the concrete.

If you’re totally confused by now, don’t worry. You’re not really supposed to understand it all immediately. The plaque is actually just one piece of a massive multi-part installation called Parapet Relay by prolific artist, Buster Simpson. Funded by the state’s Art in Public Places program, it was installed in 1997 in conjunction with UW Tacoma’s permanent move into the warehouse district.

There are three more plaques installed on and around the nearby campus. Each of them has a unique theme conceptually related to local history. They also serve as viewing points for the second half of the installation: a pair of enormous signs displaying a series of words (IDEA, WISDOM, GATHER, LABOR, STORAGE, UW, and TACOMA) along the south and east parapets of the Woodruff-Pratt building.

According to Simpson’s website, “The words are applied in a variety of mediums to a louvered surface which kinesthetically changes as one moves throughout the campus and surrounding neighborhood.” One word, wisdom, is only visible from a particular angle in just the right light. The signs along UWT’s central stairway and Pacific Ave. are 90 and 50 feet long, respectively. Considering this, it’s amazing how few people have ever actually noticed them.

Simpson’s goal was to make UWT “a more pedagogical campus.” Many of the references on the plaques hint at immensely poignant and intriguing points in Tacoma’s history. Even if you have no association with the college, it’s worth a walk around the campus to see the whole thing in person and definitely worth the time to look up some of the people and places mentioned.

See the rest of Buster Simpson’s work on his website including other installations in Tacoma and Seattle. 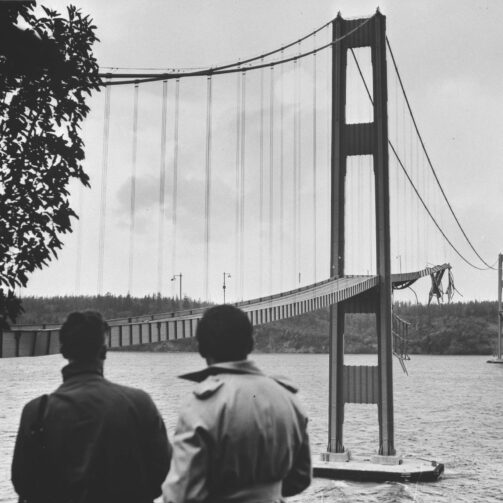