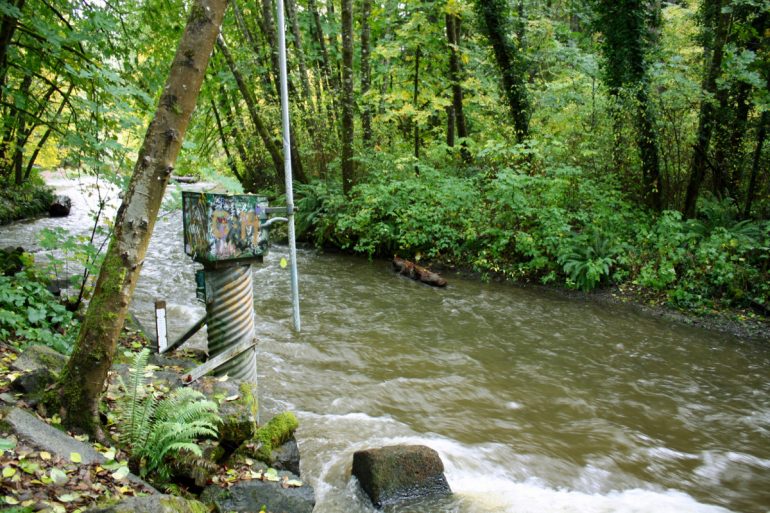 In Search of Chambers Creek Salmon

It is a crisp fall day in Kobayashi Park. The trees that form a canopy over the rushing waters where Leach Creek flows into Chambers Creek are changing colors and yellow leaves blanket the trail. I’m here looking for one of the Northwest’s most spectacular sights — the return of salmon to the rivers and streams of their birth to spawn. Here, in the heart of the suburbs surrounding Tacoma, chinook, coho, chum, and pink salmon come to lay their eggs. There’s only one problem: there aren’t any salmon.

“First, you’re a bit early,” says Barbara Ann Smolko. Smolko is the Watershed Coordinator for the Chambers-Clover Creek Watershed Council. “Salmon in the creek don’t normally return until December or January…[but] they are struggling. It’s mostly an access issue.”

At the mouth of Chambers Creek, I pull over onto the side of the road and I can see what she means. Through a chain link fence, I can hear water rushing over the top of Chambers Creek Dam. The dam was built in 1915 as part of the nearby mill. The mill is no longer operating and sits partially demolished, but the dam remains. The dam is a major barrier, even with a fish ladder in place. Its presence has completely altered the lower reach of the creek, turning a swiftly flowing stream into a shallow wetland that is inhospitable to returning salmon.

Decades of development, industrialization and urbanization have taken their toll on the fish. Today, the total number of Puget Sound chinook is only one-third of what it was a century ago. In 2000, the Puyallup, Nisqually, and Squaxin Island tribes — the three local tribes with fishing rights to Chambers Creek — and the Washington Department of Fish and Wildlife agreed to capture all returning chinook at the dam. The fish are then moved to hatcheries, which boost the salmon population artificially, but at the cost of removing the fish from their niche in the freshwater ecosystem.

“We’re looking into whether it’s possible to remove the dam,” says Smolko. “But if you take the dam out and let the system go, your ability to supplement the run decreases and a natural run may produce less fish.”

“It’s a terrible tragedy for the salmon,” says Cindy Haverkamp, a graduate student at Seattle University and a member of the watershed council. “What’s important to remember is that the dam impacts the whole ecosystem. The nutrients that the salmon bring from the ocean aren’t making it back to the stream. There’s an incredible amount of biomass that improves the state of the stream that’s missing.”

Not everyone is in favor of tearing out the dam. While the dam prevents the salmon from swimming upstream, it makes them easier for fishermen to catch by containing them at the mouth of the creek. There are also worries about making a bad situation worse, as the sediment trapped behind the dam may contain toxins that could do more harm to the environment if they are released downstream.

Proposals to remove the dam have come and gone, but Haverkamp is optimistic that momentum is gathering to finally take it out and start restoring the estuary. There’s grant money available to study the issue, but first, all the stakeholders need to be on board, including the tribes, city and county governments, environmental groups and the developer who currently owns the property.

The dam is not the only thing impacting the native salmon. Water quality in the Chambers Creek system is also a problem. The Chambers-Clover Creek Watershed covers 149 square miles from North Tacoma to Graham and is home to around 345,000 people. Toxic run-off from all those roads, rooftops, and lawns rush into the creek after heavy rainfalls — the same time the salmon begin swimming upstream. Contaminated groundwater also finds its way into the watershed.

I peer into the fish ladder at the Chambers Creek Dam for a long time before I’m ready to give up. As I turn to leave, something catches my eye along the shore. The tide is out and the beach is slick and muddy. Careful not to slip, I inch out to the water’s edge. There, resting on the beach, are the bones of an adult salmon. Despite the degradation of their habitat, the salmon still make the arduous journey across the Pacific Ocean to reach this place and it may not be too late to restore the stream they rely on. 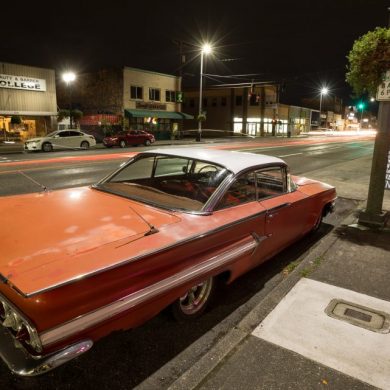