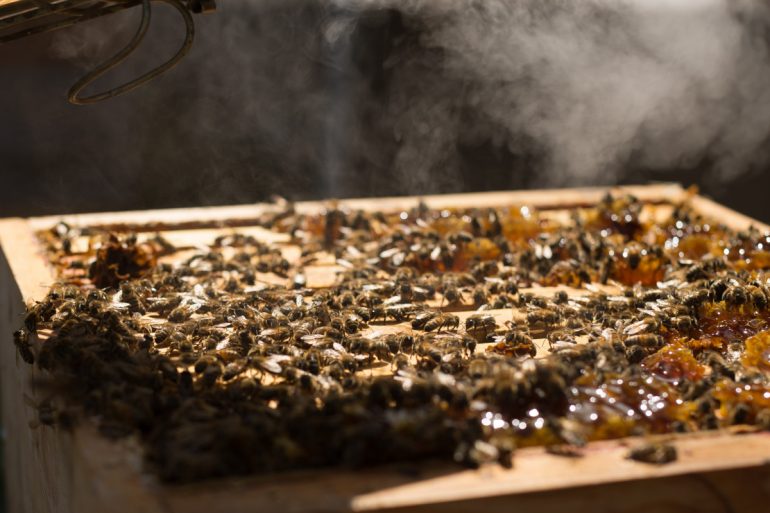 Getting to Know The Birds and The Bees: Backyard Agriculture in Tacoma

Keeping any kind of animal in your home comes with a certain amount of work. For most of us, the payoff for that work is companionship and occasional entertainment. But for a few dedicated households around Tacoma, the relationship is somewhat more complex and, from some perspectives, more beneficial. Backyard chicken coops are almost as common as vegetable gardens these days, and even beehives are becoming more and more visible in urban areas. Hotel Murano on Broadway and 13th set up a hive on their roof in 2016 and SeaTac Airport hosts 24 hives on some unused land near the airfield.

At a house that regularly hosts punk and metal shows in the detached garage, you may not expect to find a flock of chickens in the backyard. But that’s exactly the situation at the Eastside home of John and Liz Marsh. Housemate Mercedes Redman admits she looks more like someone who would sacrifice a chicken than someone who would raise them. Fortunately though, chickens are not known for being overly judgmental.

The coop is home to a flock of six chickens: Lucy, Travis Jr., Cruella, Anne Frank, Dummy, and a new bird who hasn’t gotten an official name yet. “I wanted to name it Trash Can” says John as he tosses them a handful of leftover summer squash. In case you’re wondering, Anne Frank earned her name after escaping from the coop only to be found a week later hiding behind the refrigerator.

Depending on breed, age, and environment, an average chicken will lay about five eggs a week. For the backyard chicken farmers I spoke to and many others like them, though, it’s not just a cost-saving system to get cheap eggs. Some just like having them around, some appreciate the role chickens play in the whole concept of sustainability, and everyone I spoke to appreciates the composting powers of their flocks. Its rare to find someone with chickens who does nothing else in their yards. Bees, it seems, fit nicely into this lifestyle as well.

“Our meat comes wrapped in plastic, our honey comes in plastic bears.” says Jeff Ehli, as he tends to a pair of warre bee hives. “It’s easy to forget where it all comes from if we don’t participate in it somehow.”

Since 2015, Jeff has spent his leisure time doing something that most people would prefer to avoid if at all possible: he owns and manages multiple backyard beehives throughout Tacoma, typically working without any protective clothing. He uses smoke to pacify the bees before doing any work on the hives and says he only gets stung two or three times a year. His approach to beekeeping is somewhat uncommon, taking a minimally intrusive approach and putting a priority on the wellbeing of his hives rather than the amount of honey he harvests at the end of the season. Even still, he usually gets around a gallon and a half from each hive.

If you ask him why he does what he does, the tasty golden superfood is surprisingly low on the list. The most enjoyable part for him is the involvement in an important ecosystem. It’s widely accepted in modern science that bees play an integral role in the lives of humans. It’s also fairly common knowledge that bees have been dying off all over the world as a result of excessive pesticide use and habitat loss. Every backyard beehive gives a home to tens of thousands of honey bees which in turn have a hugely positive impact on the surrounding environment.

Setting up beehives in your yard is a unique venture, even among backyard farming types. As Jeff points out, “Bees are still capable of surviving on their own without human help and I think that’s pretty cool. We can’t say that about chickens or cows.” Beekeepers will go out of their way to collect swarms before pest control companies can kill them. The community of beekeepers in Tacoma seem to be participating in a larger effort to bridge the gap between average citizens and the nature that sustains them.

That philosophy is strongly evident at the home of Cory Pederson. His property more closely resembles a farm than a residential yard. It’s not an especially big yard, but it is extremely efficient in its use of space. There’s a fish pond, a hops trellis, and more fruits and vegetables than I can list here. Cory explains, “I’ve been into gardening since I was 16. When I started working with hydroponics my buddy was growing pot and I was growing tomatoes.”

He also keeps a hive of bees, 20 chickens, and one rooster*. Along with his neighbors’ three hives, his garden is kept well pollinated. He keeps chickens mostly for the continuous supply of compost. His chickens will also consume an entire colony of ants if they ever start to go after the honey in his hives.  When it comes to his bees, he’s actually most excited about the propolis. Propolis is like bee resin; they use it to seal up gaps in the hive and other basic maintenance tasks. Humans on the other hand use it for treating everything from minor burns to cancer.

Cory takes me into his house and shows me a mason jar full of what looks like a mixture of hot sauce and crude oil. He offers me a wooden spoon from the jar, “Dab your finger in this and give it a try.” I smear some off the spoon and stick it in my mouth as he mentions, “I use this to heal my wounds.” Cory tells me it’s a mixture of homemade moonshine and propolis with most of the alcohol evaporated out. The taste and texture are difficult to describe but if there were such a thing as a homemade cancer cure, I believe it would taste something like this.

Back outside, a mother hen trots around the yard with her six chicks picking out whatever bugs and bits of food they come across. In the chicken run with the rooster and the rest of the hens, a young wild rabbit munches on some vegetation. Cory’s children saved the rabbit from a cat, set it free, then found it in the chicken run a short time later. It’s been there ever since, living peacefully with the chickens.

Bees and chickens aren’t for everyone and they’re not likely going to become as popular as cats and dogs. If current trends in Tacoma are any indicator, though, we’ll probably be seeing more of them in the coming years. If you’re thinking about setting up a flock of chickens, a good local resource is Garden Sphere on Proctor. If you’re at all interested in bees, you should definitely check out Pierce County Beekeepers. They hold beginner meetings on the first Monday of every month at the WSU campus at the east end of 72nd St. in Puyallup.

*Cory’s home has a Tacoma address but his specific location allows a legal exception for the extra birds. 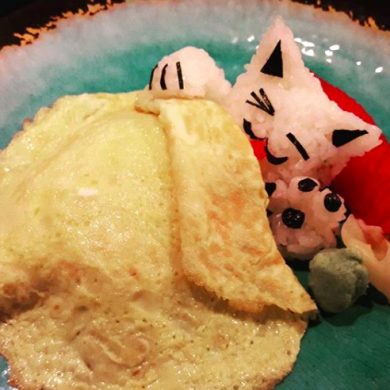